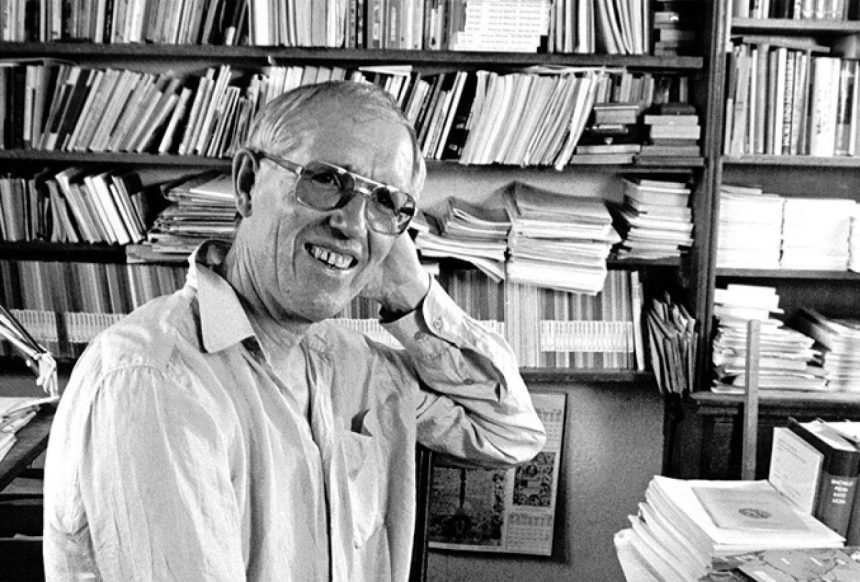 German university professor of theology Adolf Hampel, diplomat, a humanist, and true friend of Bosnia and Herzegovina (BiH), expert on Eastern bloc issues, and promoter of international understanding and reconciliation, has died at the age of 88 in Hungen.

In 1993, during the war in BiH, he wrote a book entitled “Maastricht starb in Sarajevo” (‘Maastricht dies in Sarajevo), sending a clear message to Europe that Maastricht had collapsed due to the siege of Sarajevo and the aggression on BiH.

”My friend Rudolf Grulich and I wrote this book out of disappointment because of the European Union’s (EU) behavior during the war in BiH, primarily because of the arms embargo on the Army of BiH, which was necessary to defend against aggression, as a condemnation of decline of political morale. Our condemnation was confirmed by the events that followed. Dayton was not a fair solution. In order to find a way out of the situation, one must start from the current situation,” said professor Hampel in an interview, referring to the decades of Maastricht and the decades since the signing of the Dayton Peace Agreement.

For the post-Dayton situation in BiH, its survival, and approach to the EU, Hampel, who strongly lobbied for a sovereign and indivisible BiH during the war, stopping aggression and ethnic cleansing, through numerous lectures, political and theological engagement, pointed out that without agreement and consensus of the three constituent peoples in BiH, the situation cannot improve.

His assessment then is still relevant today.

”The problem of BiH is in the mutual relations of three ethnic and religious groups. Without some kind of agreement, it is difficult to move closer to the EU. I see only one solution, and that is the federal model of Switzerland, which has been functioning for centuries, although there are difficulties with four different languages (German, French, Italian, and Romansh). In BiH, it would be easier to implement. Despite the wounds of the recent war, each ethnic group must give up its own nationalism and chauvinism for the common good. The EU can also help by clearly calling on Serbia and Croatia to give up their plans to annex the territory of BiH,” professor Hampel pointed out ten years ago.

These assessments of a distinguished German professor of theology have outlived him because the situation in BiH has not changed since then. Sounds like they were uttered today.

Professor Hampel was proactive in bringing East and West closer, Catholicism and Orthodoxy, Christianity and Islam… he traveled tirelessly to Eastern Europe working to develop international understanding between the two blocs. In 2012, he published his memoir entitled “My Long Way to Moscow.”

For decades, politically engaged, at the top of the ruling German Christian Democratic Union

(CDU), a former Vatican student, professor Hampel as a mediator between the Holy See and Moscow along with Cardinal Walter Kasper, President of the Pontifical Council for Christian Unity, was awarded the Russian Order in 2004 for his services in mediating the return of the cult icon of the Virgin of Kazan, known as the “Protector of Russia”, from the Vatican to Kazan. A replica of the icon was presented to Pope Francis at a historic meeting in Cuba by Patriarch Kirill, which was assessed as a deeply symbolic gesture in bringing the two churches closer through the history of their relations.

For decades, the home of the Hampel family in Hungen, not far from Frankfurt, has been open to refugees, and his wife Renate has been working with them continuously and voluntarily. Through German language instructions she organizes in her home, conversation and other activities, to take the youngest to the cinema, enroll in school, and adults to the theater, to an exhibition, for a walk… she helps them socialize and adapt to life in a new environment, far from their own home.

She did so in the past with the Kurds, then those who came from the countries of the former USSR, then with numerous refugees from BiH, and in recent years with migrants from Syria and Afghanistan.

As an intellectual, Hampel not only spoke and wrote about establishing communication with Eastern Europe but also maintained many contacts abroad, and organized and monitored aid transports to Eastern and Southeastern Europe, to BiH, and wherever help was needed. He helped refugees find a new home in Germany.

Asked why he had so much empathy for refugees, Hampel said in an interview that he had been a refugee three times.

”As a child, I was a refugee in Czechoslovakia in 1938, then in 1945 before the arrival of Soviet rule, and in 1946 when my father’s family was expelled along with three million Germans from Czechoslovakia to Germany. I sympathize with the refugees,” Hampel pointed out.

He inherited his sympathies for BiH from his father, he believed in the future and survival of BiH. Immediately after the signing of the Dayton Peace Agreement, at the end of 1995, he came to Sarajevo. After that, he visited Sarajevo and BiH several times.

Due to his numerous personal connections and erudition, Professor Hampel was highly sought after as a political advisor and expert on the Eastern Bloc. The Russian attack on Ukraine particularly affected him.

Until his death, he was in the process of establishing a circle of friends of Russian opposition politician Alexei Navalny, who is in prison.

After receiving his doctorate in Rome in 1962, Hampel taught in Konigstein, and in 1969 he became a professor of Catholic Church History and Moral Theology at the University of Giessen. The priest Hampel asked Pope Paul VI to release him from celibacy, which the Pope did. Adolf Hampel was allowed to marry his girlfriend Renate, now a wife. They have two children and grandchildren. Hampel was named an honorary citizen of Hungen last year. It was he who, together with his wife Renate, in 1974, and with many friends and acquaintances launched a daring project to rebuild the castle (Schloss) in the city of Hungen, after which Schloss became the decoration of the city, home to various cultural and entertainment programs and social gathering. This is where international understanding and rapprochement live on. The doors of his home in Shloss are always open for friends, acquaintances, exiles, and migrants. In a word, a hospitable and cosmopolitan address.

His life’s work has been internationally and repeatedly recognized, Klix.ba writes.

BiH invited to NATO Summit in Madrid, one of the most important in the History of the Alliance
Next Article