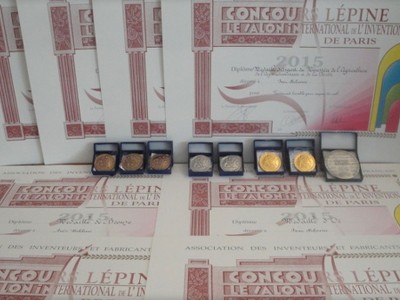 Members of the Association of Inventors of Bosnia and Herzegovina received eight awards for seven innovations at the 114th Exhibition of innovations: “Concours Lépine” in Paris.

If it is known that from total of 600 exposed innovations every third was awarded, then it becomes obvious how much innovations of B&H Inventors were above the average of other papers presented in Paris.

Ivan’s neighbor from Široki Brijeg, Zoran Kutle, won the gold medal, for device for extracting sunken vessels only few hours after the sinking.

Prof. Dr. Zehrudin Osmanović from Tuzla won the silver medal for the system conversion chemical waste generated during the production of salt and soda into cement. Silver medal was given to the Sarajevo innovator, Miralem Fetahagić, for the internal three-combustion engine.

Bronze medals were awarded to high schoolers Amina Hajdarević and Jasna Nuhić from Bihać for device that converts plastic waste into the liquid fuel, and Avdo Halilović from Kladanj who presented the sanitary pad for the head on the seats in the vehicles.

The bronze medal was given to Zdravko Bosnić from Banja Luka for a tire that, without stopping, automatically repairs in the case of drilling with a sharp object.

Profit of “Motorways of the RS” 10 million BAM
Next Article