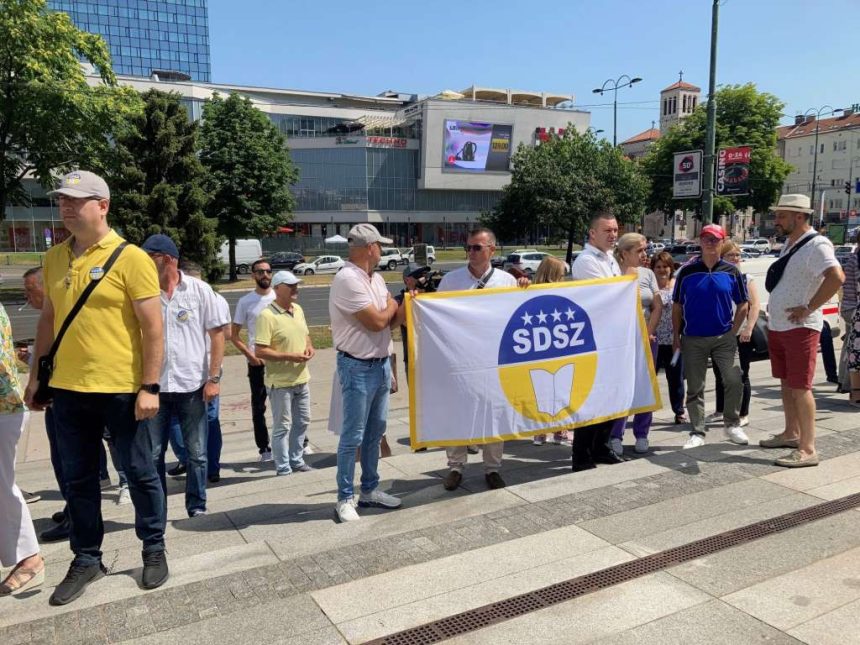 Employees of state institutions gathered again in front of the building of the Parliamentary Assembly of BiH (PSBiH), saying that their material position has not been worked on for 12 years. They are especially concerned that the public identifies them with ministers and parliamentarians, while, as they say, they are fighting for a bare existence.

Today, the workers of the state institutions of Bosnia and Herzegovina are again in a peaceful protest in Sarajevo, demanding the signing of a collective agreement, higher salaries and the adoption of the budget.

As stated, the government has been terrorizing them for years.

The President of the Independent Trade Union of Officials and Employees in the Institutions of Bosnia and Herzegovina, Salih Karčić, mentioned that they are organizing protests for the sixth time.

“We are the only country in Europe in which the government has not signed a collective agreement with civil servants. The signing of the collective agreement must be accelerated, because that is how we become partners and get legal protection. This is not how we exist, we are an association of citizens that no one asks anything,” he reminded.

He said that they are also asking for the adoption of the budget.

“We are asking for the adoption of the budget. We ask that the base and coefficients be aligned with the cost of living. The consumer basket for a family of four is 2,400 BAM, and two thirds of employees in state institutions cannot survive on this income. The basic salary for workers is 475 BAM,” Karcic pointed out.

He aded out that classic terror has been carried out against the workers of state institutions for the last 13 years.

“We have not had an increase in the salary base for 13 years,” he added.

According to him, the trade unionists also addressed the embassies of foreign countries in writing, but no one ever answered.

He reminded that they are only workers and that they do not have the status of parliamentarians and ministers, for which he stated that they were paid up to 9,000 BAM.

Karcic pointed out that their status could be changed by the ruling SDA, SNSD and HDZ parties.

Speaking about what the increase of the base will mean, he pointed out that the employees will get a higher base of 60 BAM, but that the ministers will get 500 BAM more.