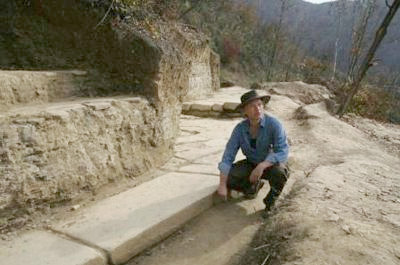 Dr. Semir Osmanagic is the founder of a government funded geological excavation project that aims to uncover and learn more about the potential pyramids in Visoko, Bosnia and Herzegovina. The foundation is called “Archaeological Park: Bosnian Pyramid of the Sun Foundation.” Osmanagic and his team are continuing to research the hypothesis that the pyramid is constructed from the blocks, unlike Dr. Aly Barakat who suspects the pyramid consists of blocks covering a man-made hill. Osmanagic and his team theorized this for two reasons: Firstly, because only a few areas of the pyramid were cleared of soil and vegetation. Secondly, the excavation techniques being used were not enough to see deeply enough into the pyramid to determine if anything is located on the inside.

Semir Osmanagic discussed how each concrete block is a different size and shape, and how this structure is similar to pyramidal structures in Cuzco, Peru. He suggests that a potential benefit of having a structure with different sized and shaped blocks is to help with structural stability; blocks of this sort would lock themselves in as opposed to collapsing during, for example, an earthquake.

Osmanagic also talks about how the spaces between the blocks go all of the way to the inside of the pyramids, and how these gaps possibly served to collect water and to ventilate the air. He also speculates that the reason that there two layer blocks on the pyramids (the base being completely flat and the top being wavy and textured) is that, “whoever designed these blocks wanted a wavy texture on the top.” In general, there are two types of blocks, each with a different look – one block looks like a monolith line of concrete and the other block looks like construction plates with clear edges and sides.

Although the construction of the Bosnian Pyramids in Visoko, Bosnia and Herzegovina is not entirely known, there seems to be evidence pointing towards the idea that the material used to build the pyramids is an extremely advanced form of man-made concrete with unique properties. Perhaps research done by volunteers of the “Archaeological Park: Bosnian Pyramid of the Sun Foundation” over the summer of 2015 will tell us more..