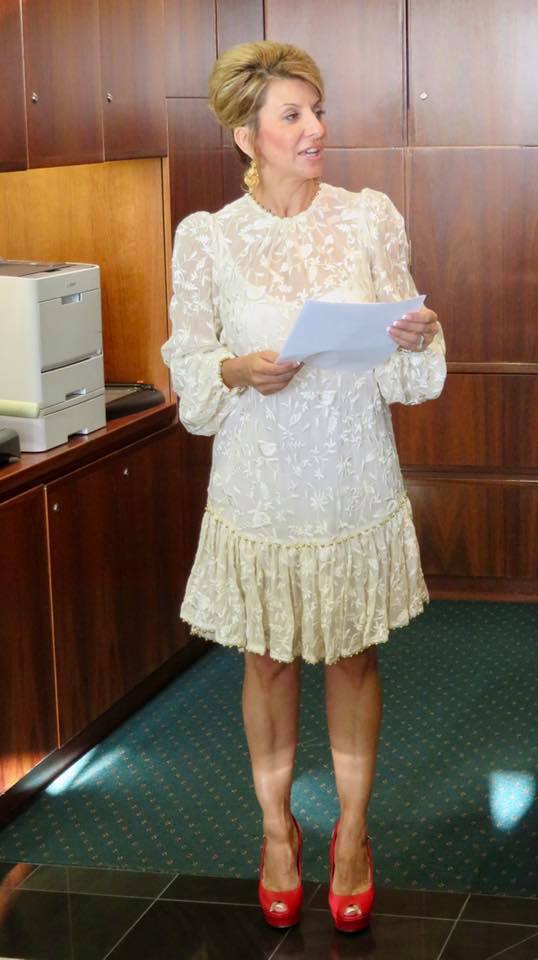 I was born into a very wealthy family, in Bosanska Dubica, Bosnia and Herzegovina. My education started there and I graduated Business Marketing in Sidney, Australia.

Your clientele are people from the very top of the political structure of the country, and those from the world of acting, culture etc. How do they react when you say you are Bosnian?

The first reaction is always a shock and slight curiosity. A lot of people believe it is still war-torn country, but once I show them photos as well videos, they do stay speechless and even more curious to see what BiH has to offer.

One the question regarding the work on a project of School of Bosnian language, Mrs. Gabriel said that this has been a very successful project and that she is beyond pleased with the outcome. She is very thankful to everyone involved especially to the help of the Bosnian Society and the Islamic Association.

“Thanks to them the number of students has tripled. This was not an easy process. Even though I had met with all parents and students, there was a lot of paperwork and legal issues that had to be put in place for the school to open. After a few very long months I am very pleased with the outcome and grateful to see the student enjoy themselves. Its interesting to see how open and willing they are to learn their mother language, especially when a few of the students have one parent that is not from BiH,” added Gabriel.

“I always say that I left BiH, but it will never leave me.”

I am very proud to be from the country I am. Had the war not forced me to migrate I would have never left. Everything I know is, Bosnian. My belief system, my heritage, my culture even the food I cook every day is Bosnian!

You also financed humanitarian projects in BiH, can you give more details to readers of Sarajevo Times.

I am the producer of a film by Jasmila Zbanic. She is a very well-known and respected Director. We worked to together on a few projects, one of them being about all the women that have been raped during the war in BiH. It is a very difficult story, but one I do believe should be told. Another project which I am proud of is helping the University Clinical Centre in Sarajevo purchase an ultrasound machine for diagnosing heart disease.

My biggest success is first of all my family. Being a mother and wife and then of course success in my business ventures. We are most definitely moving to Bosnia the only question is when. We are waiting for a few of our firms to be registered in Bosnia. There is still a lot of paperwork and other details that need to be taken care of prior to our move. Everything is being organized in Bosnia as well as in Australia. I have duties to both. I am also very pleased to say that a month ago we did officially open up a firm for telecommunications and real estate, in Bosnia. Plenty more to come in the next five years so stay tuned and thank you for the help and support.

Ms. Dzemila Talic-Gabriel, one of the most successful Bosnian women in the world, lives and builds a career in Australia for a long time, and work on the promotion of a positive image of Bosnia and Herzegovina in the world.

BiH recently appointed Djemila Gabriel for Honorary Consul in New South Wales. This successful Bosnian woman and humanitarian is engaged in the business of real estate in several countries around the world. She is married to an Australian businessman Chris Gabriel, one of the 100 most influential people in the world.

Her function of honorary consul came after a long and very successful cooperation with the Embassy of BiH.