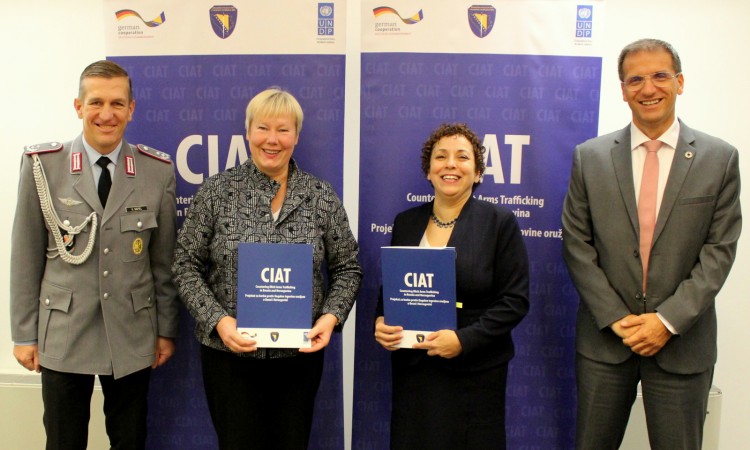 At the signing ceremony in the capital Sarajevo, German Ambassador to BiH Christiane Hohmann signed an agreement with the United Nations Development Programme resident representative Sezin Sinanoglu, extending the project’s implementation until 2021.
Hohmann pointed out the importance of the continuation of CIAT project, as well as further development of successful activities.

“The fight against illegal arms trade aims to provide more security not only to citizens here in BiH, but also to people throughout Europe, “Hohmann said.

The money will be used for training of 400 members of BiH Border Police, procurement of specialist equipment for detection of weapons, as well as the strengthening of communication between institutions involved in the fight against illegal arms trafficking.

Additionally, during the CIAT project, some 1,500 police officers in BiH who guard the border will undergo a special training of weapons, ammunition and explosives detection by the end of 2018. The training will be done by using the weapons detection equipment whose total value is around 346,000 euros.

For her part, Sinanoglu highlighted that the continuation of the support of Germany to the CIAT project represents a significant step towards strengthening the security of communities in BiH.

“This also represents the continuity in the improvement of professional standards and practices services in BiH, and it also helps the country to get closer to the European Union,” Sinanoglu added.

The total allocation by Germany for strengthening of the capacity of BiH Border Police under CIAT projects since 2017 amounts to 800,000 euros. (1 euro = 1.14 U.S. dollars)