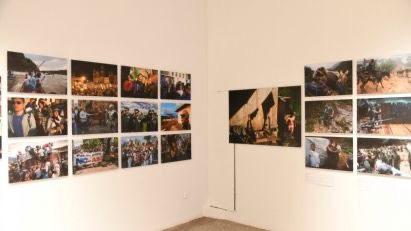 Haviv is a world-renowned war photojournalist who has covered 25 world war conflicts during his career.

“We are entering the third month of the war in Ukraine and there is less and less attention,” Haviv said. ”People are getting used to the war and it is part of the Russians’ strategy to prevail in the war. I saw tensions, it is imperative that people who are against the war be loud and support Ukraine financially and militarily, “Haviv mentioned.

It is a constant struggle to ensure that people believe in the work of journalists, says Haviv, adding, “We saw people in Bucha who were executed, the Russians said they were not.”

“But with technology, we will confirm that it happened. The Russian public will not see it, but at some point, it will stop and they will see what was done on their behalf.”

“When we look at any city, Belgrade, Sarajevo, Kyiv, Moscow, London, Paris, New York, Washington D.C., you will see statues of generals, we have poetry about war, thousands of books about war… Military parades are among the biggest state events. Our identity and people are measured by the wars and countries we occupy. That is why it is difficult to create peace. If I ask you what peace is – to define it – it would be difficult for you. You can define peace by what is not, peace is not war,” Garry Knight, a photojournalist, pointed out and added:

“Peace is, it should be, the greatest human achievement. When we stop celebrating war and generals and see that peace is the greatest and the best thing we can do… We will always fight for peace. “