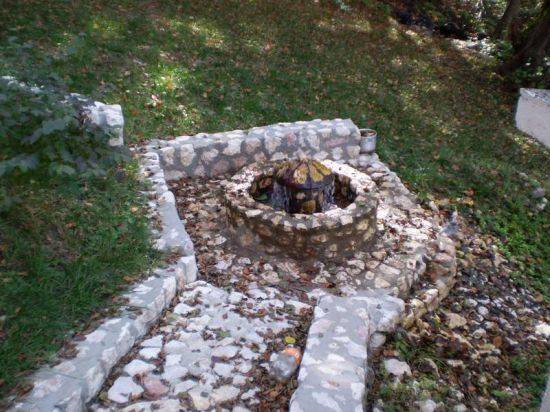 A large number of believers gathered at the praying site Dobre vode located in the Foča Municipality, not far from the settlement Zarudina- Kolun. According to the residents of this area, the site testifies to the power of prayer of true believers, such as the ones whose prayers were once answered and water started running there. It is believed that this water has curative properties.

Story says that water appeared in one dry summer, after the prayer of Sheikh Murat and his son Salih whose tombs are in the turbeh built in the settlement Zarudina. This turbeh is the only religious facility in the entire municipality of Foča that has not been demolished or burnt during the aggression. Believers visit the site for years, drinking the good water, bathing with good water in improvised baths, taking good water home.

“I have been coming here since my childhood. I used to come with my mother, we prayed and I testify to the healing properties of this water,” Rabija says.

Esmana Durmić also visits the praying site every year because, as she says, she feels peace and prosperity there.

“The water is curative, for drinking, bathing, massaging painful parts of the body. I believe in that and I love to come here,” Esmana says.

Zijad Effendi Ljevaković, envoy of the Reis ul-Ulema of BiH, said that Dobre vode are a blessed place and in that context he cited the verses of Quran which speak of the testimony.

“Today, at this place, we testify to values of God which could certainly not be testified to in any different way, except for making us believers and Muslims. We testify to the value of land, water, air, people, places that Allah created, the value of prayer and Zikr, rituals and Ibadah, and that is why we, Muslims, are witnesses,” said Ljevaković.

Hundreds of liters of water from Dobre vode were taken to other parts of BiH.