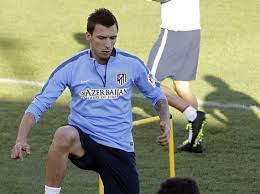 Croatian national team player, Mario Mandzukic will, according to Italian media, continue his career in Juventus.

Mandzukic is very close to a transfer from Atletico Madrid to Juventus, and the Spanish club will earn 18 million euros. A Croatian national team player will make a medical exam  on Monday.

After Juventus brought Paul Dybala for a big money, Mandzukic will arrive to the club as replacement for Carlos Tevez. Argentinian international player has an intention to leave Juventus and come back to Boca Juniors, but Mandzukic will have a fierce competition given that Alvaro Morata and Fernando Llorente remained in the club.

Mandzukic will leave Atletico Madrid only year after he arrived to Vocente Calderon from Bayern. Despite having scored 20 goals in 42 matches, Manzukic is frustrated with the previous season. He had a several disagreements with the coach Diego Simeone, and when Juventus offered him 3.5 million per season, popular Mandzo decided to go to Italy.