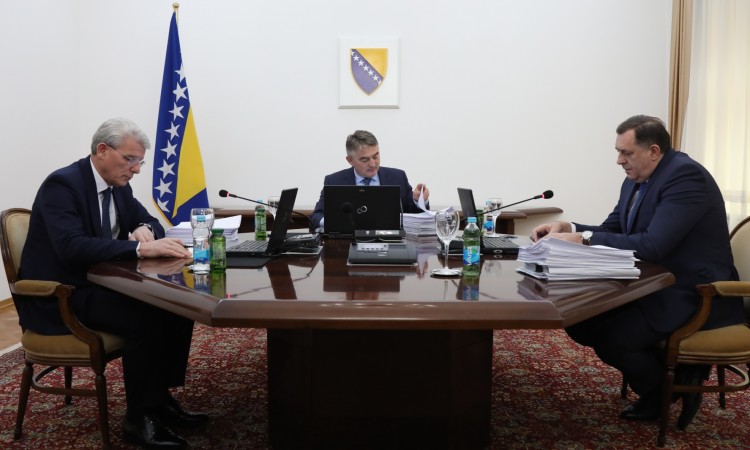 Institute for Research of Genocide Canada (in Bosnian: IGK) and organizations of Bosnia and Herzegovina (BiH), as well as communities in Canada, sent a letter to BiH Presidency Chairman Milorad Dodik, and members Zeljko Komsic, Sefik Dzaferovic, and BiH Foreign Minister Bisera Turkovic about the “anti-Bosnian and anti-constitutional behavior” of Ambassador of BiH to Canada Marko Milisav.

”Marko Milisav, the Ambassador of BiH to Canada, does not represent the views and foreign policy of the state of BiH, but the views of those who proposed him for this honorable diplomatic duty. In an earlier letter, we pointed out the anti-state and anti-Bosnian behavior of the Ambassador, who did not act according to the guidelines of the Minister of Foreign Affairs. Namely, on July 11st, on the 25th anniversary of the genocide in Srebrenica, the flag at the embassy was not lowered to half-mast. Now, we are informing you that the anti-Bosnian and anti-constitutional behavior of the Ambassador continues, ” IGK stated in a letter, whose co-signatories are also BiH organizations and communities in Canada.

As they emphasized, the Ambassador of BiH to Canada participates in the television show in the Republika Srpska (RS) entity, in which he slanders individuals from the BiH diaspora in Canada in an undiplomatic and inhuman way.

”Regarding the media allegations that Canada proposed Joseph Ingram as the High Representative of the International Community for BiH, the Ambassador of BiH to Canada, Marko Milisav, organized a meeting with representatives of the Government of Canada. On his own, Ambassador Milisav conveyed to the Canadian side that there is no consensus in BiH on the further stay of the Office of the High Representative (OHR) in BiH and that the most prominent position of the two constituent peoples is that it is time to close that office. Ambassador Milisav lied to the Canadian side because not a single relevant BiH institution (such as the Council of Ministers, BiH Parliament) has commented on the status of the OHR. This was done only by the parliament of one entity – RS, but it does not show the official state position of BiH, nor the two constituent peoples, as Milisav tried to present it, ” they pointed out in the letter.

He conveys private position as official

Ambassador Milisav conveyed his private position, also presenting it as official, that BiH, with its two entities and three constituent peoples, is “ready to take responsibility for its future and development, in accordance with the Dayton Agreement and international law,” suggesting that the High Representative should leave BiH, as they stressed in the letter.

”No institution in BiH has ever taken the position that the High Representative should leave BiH, nor has it assessed that local institutions are ready to take responsibility for their own future and development. In this way, the Ambassador acts outside the constitution and established diplomatic practice. It causes enormous damage to the diplomatic relations between BiH and Canada. Instead of deepening and expanding bilateral relations, the Ambassador, by presenting untruths, causes great damage to the reputation of BiH in Canada, a friendly state that helps BiH a lot in its Euro-Atlantic integration and overall state prosperity, ” it is noted in the letter from IGK and BiH organizations and communities in Canada.

IGK and BiH organizations, as well as the communities in Canada, called on the BiH Presidency and the BiH Ministry of Foreign Affairs to urgently initiate disciplinary proceedings against Ambassador Marko Milisav.

US Embassy congratulates Director Zbanic for Oscar Nomination
Next Article