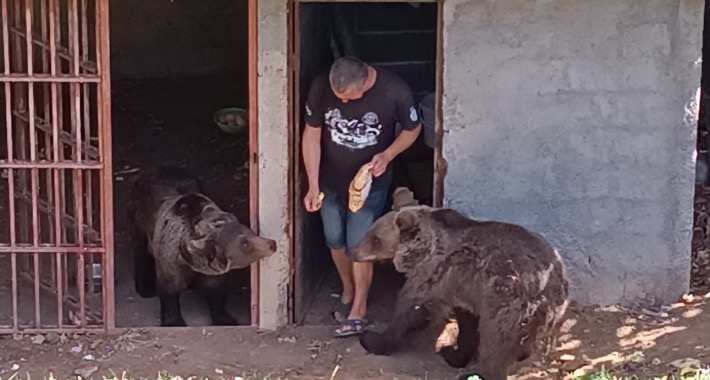 Feeding two female brown bears and one wolf in the mini zoo at the Paragliding Club “ParaGhost” camp from Doboj on Mount Ozren is the daily routine of the president of that sports collective, Petar Tubic.

Tubic is also the president of the citizens’ association “Staro Naslijedje” (eng. An old heritage), which deals with the development of rural tourism on that mountain.

”This started as a base for the paragliding club, and later developed as a kind of tourist destination. Since most of us are animal lovers, we started collecting animals. So, by chance, the female bear Masa came to us, whose mother was killed.”

”She was found in the forest alone. A little later, Ljubica, another female bear, also arrived, who was also found next to her dead mother. We took care of them, and over time, other animals began to arrive,” Tubic stated.

Wolf and donkey are best friends

He adds that one female bear is four years old and the other three years old, and that they are socialized and used to people.

”They simply hang out here with us. They play and there is no fear. Of course, people are a little skeptical when you say a bear, it is a beast after all, but when they are given attention and care, that is, when they are raised properly, there is no problem with them.”

”The wolf is 10 months old and still quite young, but he is totally socialized. We let him play with other animals – cats, dogs… He even hangs out with the donkey, who is his best friend.”

”It seems that there is a change of identity – the wolf thinks he is a donkey, and the donkey thinks he is a wolf, so they play and attract the attention of visitors. There is no fear, nor any aggression. There is no indication that anything unforeseen could happen,” Tubic said.

Among the animals that have found their new refuge in the Doboj paragliding camp, he notes, there are also wolf, llama, donkey, fawns…

”Then, with the help of the City of Doboj, not far from here, we also took a fallow deer farm. So we also have that farm, which is three kilometers away, as one of the tourist offers. This place is expanding in all directions and becoming interesting to a wide range of people. Some come for adrenaline sports, some for animals, some for nature, some for art… The art colony, which was also in our camp, closed recently. Every day we become more interesting and gather more and more visitors,” he emphasized.

Their area, he points out, has already become a real tourist destination of the City of Doboj, and these days they also hosted a research team, which will continue to explore the “Mokra Megara” cave until today.

‘The cave will certainly expand the tourist potential of this area. By that, I am thinking of Mount Ozren, Maglaj, Doboj, Gracanica… All the surrounding places that are gravitating toward that cave and Mount Ozren. I believe that, after these investigations, they will be “packaged” into a nice tourist potential,” Tubic is convinced.

The cave itself, as well as its surroundings, Tubic points out, are beautiful locations for research and tourist tours. Fifty-year-old Tubic also holds some paragliding records.

”Bosnia and Herzegovina (BiH), in the last year, has good records. Several good overflights have been made. I have a lot of good flights from our main airport Gostilj, and also from some surrounding and European airports.”

”I think that, now, the emphasis is on getting as many young people as possible into this sport and to devote themselves to flying, because aero sports in BiH are, unfortunately, perhaps neglected. They are not at the level they should be. It would be nice if young people get involved and discover the beauty of this sport,” he emphasized.

Paragliding, he points out, brings together nature lovers, not only fans of air sports. His club has about 40 members, and the accommodation base has about 30 beds available, Avaz writes.

The German Press about Schmidt: What made him so angry?
Next Article