The initiative for the monitoring of European integration of Bosnia and Herzegovina launched a campaign titled “4 More Years?” aiming to draw the attention of the citizens to real problems that have been persistent for many years, and which the institutions have not solved in the past period.

With the campaign, they want to return European integration to the focus of the public debate and pre-election campaign, given that the citizens of Bosnia and Herzegovina are not sufficiently familiar with the state of reforms on the European path, even though they live the consequences of that slow process every day, state the Sarajevo Open Center.

“We want to point out the areas in which no progress has been made in recent years. Our goal is to motivate citizens as voters to research the programs of political parties and ask candidates about solutions to specific problems. In this way, it will be easier to decide who to trust for decision-making in the next four years,” said the coordinator of the Monitoring Initiative, Edo Kanlić.

The announcement states that political practice so far indicated that all parties are declaratively in favor of BiH’s membership in the European Union, but that the results that the institutions should have achieved on that path are missing.

“The vote on October 2 will determine the direction of the country and the quality of life in the next four years,” it is stated from the Initiative.

The “4 More Years” campaign is the result of cooperation between the Initiative for Monitoring of the European Integration of Bosnia and Herzegovina and the Sarajevo office of the Heinrich Böll Foundation. 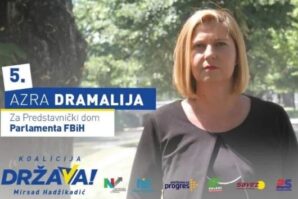