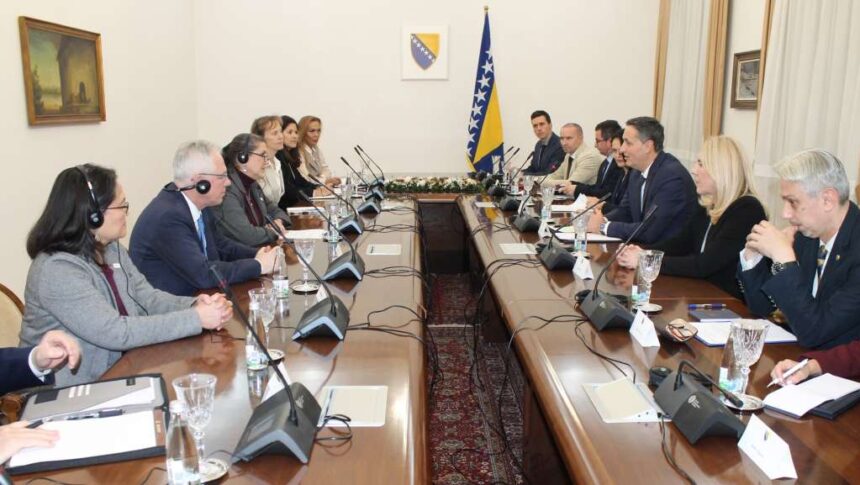 Ambassador Erin E. McKee, Assistant Administrator of the Office for Europe and Eurasia of the US Agency for International Development (USAID) and US Ambassador Michael J. Murphy met yesterday with the newly elected members of the Presidency of Bosnia and Herzegovina, Željka Cvijanović and Denis Bećirović.

McKee and Murphy congratulated the members of the Presidency and called on them to lead BiH on a new path, end the politics of division and create a better future for those they represent.

At a time when a third of BiH citizens – among them many young people – live outside the country due to endemic corruption, insufficient opportunities for career development, politicians who govern the country guided by their own narrow interests, and incendiary political rhetoric and the absence of an adequate government reaction to the real needs of citizens, Assistant Administrator McKee emphasized the need for security and stability, as well as development and creation of new opportunities in the country.

McKee called on the Presidency to be a leader in the re-establishment of functional government at all levels, to proactively oppose corruption and transparently govern in the interest of the public, stated USAID in BiH.

She also encouraged the members of the BiH Presidency to primarily work on the healing of society and reconciliation, by taking seriously the common obligation to lead their country from the past to a future that will rest on new opportunities, stability, tolerance and peace.

McKee reiterated the US Government’s commitment to continuing partnership relations with BiH, especially in improving the rule of law, human rights and economic reforms necessary for BiH’s progress toward Euro-Atlantic integration and a safer, more peaceful and more advanced future for all its citizens.

To date, the US government, primarily through USAID, has secured two billion dollars in aid to support economic, democratic and social progress in Bosnia and Herzegovina.

The US Agency for International Development is leading the US government’s efforts to end extreme poverty while promoting stronger democratic communities, noted USAID.

What was agreed at the first Session of the newly elected BiH Presidency?
Next Article