Those convicted of war crimes before the courts in The Hague are still not subject to any legal consequences in Bosnia and Herzegovina (BiH), such as the cessation of certain jobs or functions in government bodies, because their convictions were not entered into the criminal records as agreed four years ago with the International Criminal Tribunal for the Former Yugoslavia (ICTY).

Representatives of victims’ associations from BiH are dissatisfied with the many years of waiting for Hague verdicts to be entered into criminal records. They had previously asked the Minister of Justice of BiH, Josip Grubesa, to speed up the process “so that those convicted of the criminal offense of war crimes and crimes against humanity would not be in a privileged position compared to other citizens, who have records for every criminal offense and cannot stand for election, nor can they work in the institutions of BiH.”

The President of the Association of Victims and Witnesses of the Genocide of BiH, Murat Tahirovic, points out that the criminal records record crimes committed by “ordinary criminals”, but not those committed by war criminals, according to international law.

”In this sense, from the perspective of our legislation, it looks almost as if these crimes were never committed and the perpetrators were not convicted. It is the duty of every state to respect the verdicts of international courts, especially BiH, whose citizens are mostly perpetrators of serious war crimes,”Tahirovic said and added that disregarding court verdicts is a reason for denying crimes and glorifying war criminals.

According to the Criminal Code of BiH, convictions for certain criminal offenses may have the legal consequence of termination, i.e. the loss of certain rights or the prohibition of acquiring certain rights, such as the termination of certain jobs or functions in government bodies, companies or other legal entities.

Vasvija Vidovic, who was a liaison officer with the Hague Tribunal, recalls that cooperation with the ICTY does not only mean taking decisions, but also legal consequences, but she believes that there is no political will for it.

”This would be very easy to solve, considering the provisions of the Constitution of BiH, which includes a provision for mandatory cooperation with the ICTY. On the basis of this constitutional provision and the adoption of a simple regulation, the problem could be solved,” Vidovic stated.

For Pivic, the delay was caused by the formation of the “Working Group”, and the solution, according to him, would be very simple – for the Minister of Justice to change the Ordinance on criminal records.

Minister Josip Grubesa says that this is not his jurisdiction and that the criminal records are in the cantonal Ministries of Internal Affairs, the Ministry of Internal Affairs of the Republika Srpska (RS), and the Brcko District Police.

In 2018, the Ministry of Justice of BiH received final judgments from the International Residual Mechanism for Criminal Tribunals (IRMCT). After more than a year, the “Information on the taking over of final judgments from the ICTY/IRMCT for entry into the criminal record in BiH” was submitted to the BiH Council of Ministers for consideration and adoption, along with a proposal for conclusions.

It was only in July of this year, according to the Minister of Justice Grubesa, that the “Working Group” agreed on the Draft Memorandum and submitted it for an opinion to the IRMCT.

He reminds that at the session held on July 2nd, 2020, the Council of Ministers of BiH adopted a conclusion that tasked the Ministry of Justice with the competent institutions of BiH, entities, and Brcko District to propose a “proper definition of rights and obligations in solving this issue and prepare the text of the Agreement/Memorandum which would regulate the delivery and retrieval of information from ICTY convictions passed against persons born in BiH and citizens of BiH, for the purpose of recording in the criminal records in BiH.”

A former member of the Central Election Commission (CEC) Vehid Sehic says that even the entry of final court judgments into the criminal records of BiH will not prevent those convicted of war crimes from performing public functions. He adds that persons who have been legally convicted but have served their sentence, have the right to vote and be elected, regardless of whether it is a war crime, abuse of position, or forest theft. He says that everyone who has served prison terms, according to the Election Law and the Constitution of BiH, can be a candidate on the lists of political parties, Detektor writes.

US Embassy in BiH: The current toxic Political Culture is dangerous
Next Article 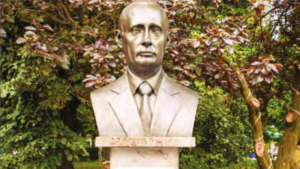