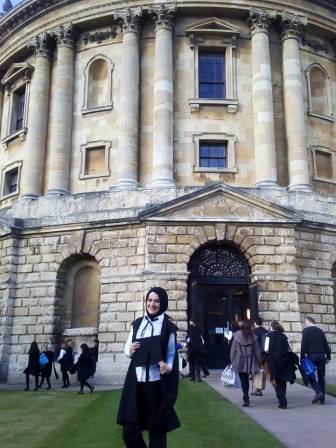 After spending the war period in Germany, she returned to BiH in 1998. She graduated in 2008 as student of generation at the Gazi Husrev-bey Medressah and in 2012 graduated at the Sarajevo School of Science and Technology where. At Oxford University she pursued a master degree in Public Policy  (MPP) at the Blavatnik School of Government with help of the Chevening scholarship.

Currently, she is working in the BBI VIP Business Club at Bosna Bank International, primarily as desk officer for the Sarajevo Halal Fair that is about to be organized for the first time in autumn with the aim to utilize the enormous potential and opportunities of the halal market and to boost BH, but also regional economy.

Sarajevo Times: Ms. Hadzic, can you tell Sarajevo Times readers more about the period when you went to study at the University of Oxford in the United Kingdom?

Oxford was a unique life experience and I am truly lucky for this opportunity. I met great friends, both – Oxonians and Cheveners, I also had the opportunity to meet Sir Noel Malcolm and was fascinated by his humble appearance adoring all his accomplishments. My MPP group was made of people highly committed to public service, motivated to work for a better society, whereas we had professors who provided really great support. The MPP is a rather new programme and I was honoured to be the first Bosnian to attend. My interests laid mostly in economy so I joined later a group from our cohort that helped out the preparation for Brexit white paper at Oxford’s Global Economic Governance Programme. I did my summer project at the Oxford-LSE Commission on State Fragility, Growth and Development, where I did a study on the case of Bosnia and Herzegovina. Through this program I had the opportunity to attend sessions lead by former Prime Minister David Cameron who was the head of the commission. Upon the completion of the MPP I got a job at the Said Business School where I worked for the Mutuality in Business Programme, a new approach aimed at making businesses more responsible and inclusive. The team was so collaborative and friendly that the goodbye was really difficult, but I felt it was also time to go home.

Don’t think it all went so smoothly as it sounds. Before I got the job at the university I worked as a sales adviser at a shopping centre, changed accommodation four times and did night shifts for Christmas in favour or leaving earlier and starting my new position.  I prolonged my stay unexpectedly as I thought it would be a shame not to use the opportunity for a valuable working experience until my visa expiration, so I took the risk and had luck to get the job at Oxford.

With Oxford diploma, although Ms. Hadzic was able work in European states, she decided to return to BiH. She pointed out that she has a strong need to live a purposeful life and she plans my moves according to that. When thinking about what to do in terms of career and life, she thinks that well-developed European states do not need more people with great degrees as much as BiH needs them.

“I do encourage migration and getting news experiences, but my journeys outside are only temporary, while my final station is here, where I feel young educated people are needed more. Finally, long ago I defined my life goals in terms of helping and changing my country. Leaving permanently for a better career would mean that I lost that game, and I don’t quit without a good match.”

I dream of making a better world – very utopian, but it’s me. Albert Einstein said ones “the world is a dangerous place to live in, not because of the evil people, but because of the good people allowing them to do what they want. I don’t want to be one of those allowing anyone to ruin this precious world. Nationalism, racism, and phobia against anything not white and European is widespread – black people know it the best, Muslims feel it too a lot.  Europe brags with human rights and tolerance, but the reality is way different.

My parents have no education and I am proud of saying I am from a really simple family, because I hope that other young people, particularly girls who have no particularly strong social background take an example and dream big. I believe everyone should get the opportunity to do what they want, whatever their background and identity is. This vision of a better world is my main motivation and I going towards it. I define my success really through the prism of creating a better world and circumvent all the de-motivators who think of me as weird because of this. There are people who think alike. I also think that, given all my circumstances I was truly lucky and feel responsible to give back, especially because of all the racism and nationalism that are a result of all those inequalities and fear against “the other”.

Young people should define their goals and work with strong dedication on them. Giving up now on every single obstacle you face means one more reason for regret in 10-20 years because of not having tried. Today my moto is really “You can’t ruin my day as much as I can make yours”. To be honest, I was never convenient about the final result of all the hard work, I just didn’t want to regret in my late ages that I didn’t try. Now I am 28 and utterly grateful for the strength and will power God gave me. Choosing the right people to be with is  also very important in our country – get yourself healthy friends. If you are not so sure about anything, there are always people happy to share their wisdom.

Sarajevo Times: How do people react when you say you are Bosnian? Do they look at you in a positive way or connect you with war that happened in BiH?

Reactions vary. Older people and those who are professionally related to war, politics, or genocide do show interest in the current situation and ask about the past; others don’t bother too much or don’t know enough about it. Usually I get lot of positive reactions for the tolerant, multi-ethnic and secular state story, but reactions of astonishment and confusion on the political establishment based on ethnicity.

Sarajevo Times: Where do you see yourself in five years? Are you planning to stay in BiH?

As I said, I do encourage migration for self-development purposes. I am definitely planning to do a PhD as I want to stay in touch with academia, especially because of the work with youth. I do see myself living in BiH when it comes to my own life track. At the moment, I really enjoy my job at BBI and hope to learn as much as possible and contribute to projects aimed at the development of BiH. Whatever comes I five years, I hope it will be in accordance with my vision for my country.