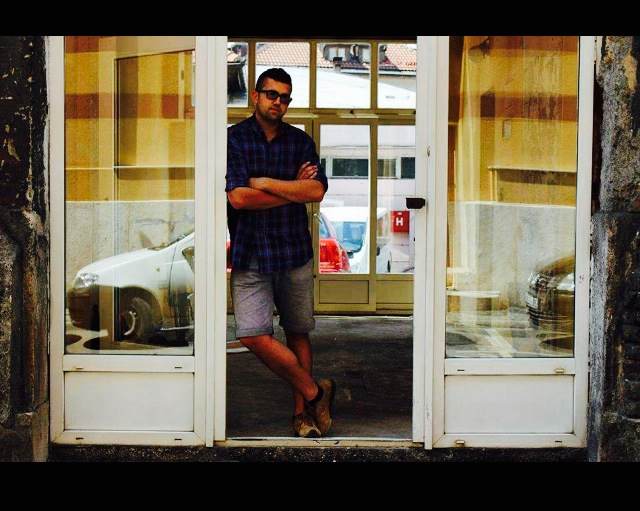 Sarajevo is witnessing a very interesting phenomenon: several galleries in town – I’m thinking about Duplex100m2, opened by Pierre Courtin in 2004, and Jusuf Hadzifejzovic’s Charlama– are run by artists. How did the idea of Brodac come about?

Brodac Gallery represents my personal protest as an artist, as someone who would like to run this exhibition space for his entire life, making a living out of it. I’m making something different from Duplex100m2; Pierre Courtin came here from outside, from Paris. I was born here. I think he had more guts than me because he didn’t know where he was going, he came here with his family, and made a big thing: he now has the biggest gallery and the biggest collection of Bosnian art of all Bosnia. That is something which you have to respect. He was also an inspiration for me. I would hang out with him a lot and we would talk about how the idea of opening another art gallery in Sarajevo. So I got the idea: why shouldn’t I be opening a new gallery?

What is your goal?

My goal is to build connections within my generation, creating an exhibition space which will work as a cultural centre as well, a place where young artists can meet, share new ideas and produce new art pieces, giving Pierre Courtin some business so that he can sell new art pieces. That is something that we don’t have in Sarajevo right now. I really want to make Brodac an active place for our art community, especially for the young generation that represents the future of contemporary art scene of Bosnia and Herzegovina.

You are remarkable for your courage: a young artist who had the idea of opening an exhibition space, investing his own money, with no initial outside support.

It’s funny because as an artist I now find myself also as a gallery director, a curator, an art historian… everything in one! Sometimes you ask yourself ‘what are you doing, and for what? What is the meaning?’ I don’t have anything to lose except money. It’s not a big deal, money is something which will always come and go. But I’m afraid that I could fail in the idea of making something for the whole society, something that might just go with the wind. I hope my colleagues will support it, not with money, but with good work and good ideas.

How did you find the space?

I asked at the Sarajevo municipality to give me the list of empty spaces in town. There was an application to apply to in order to obtain a space. Most people were asking for cafes and nargila bars. This is something our society is based on. People at the municipality were really happy, they told me that no one ever asked for a gallery before. So now I am renting it out from the municipality. I don’t have electricity right now, so for the opening, the gallery will be illuminated by candle lights. Hopefully I will get it in a month or two. On the occasion of the opening of the exhibition two big candles will be placed beside each artwork, I think it will be interesting for the visitors, especially for those who were in Sarajevo during the war; perhaps it will bring back some memories. I hope that in the future – this is something I see as a long-term plan – Brodac will also have a real meaning as a centre dedicated to young artists, ethically and aesthetically speaking. Frankly I’m not making this project to earn money; if I wanted to earn money I would have opened a café.

For the first exhibition you chose also established artists such as Jusuf Hadzifejzovic and Alma Suljevic.

I chose seven artists, first of all because, as it is the first exhibition, I want to make it big. Someone told me back then that the first impression is the most important one. I want to make it serious and offer people quality and well-known artists to start with. After this first project, my wish is to exhibit the upcoming generation and to use candles again. I want that art exhibitions follow the progress of the exhibition space’s renovation; I want art to be involved with the reconstruction, from the basics, from blank walls until it has some fancy new look. People often asked me: ‘why are you doing this?’. My first answer would be that I don’t want to lose time. I don’t want to wait until the gallery will look like a fancy white cube before I start with exhibitions.

Are you thinking about following a specific aesthetic in selecting the artists?

The gallery will be open for new ideas, always giving a chance to quality. Of course there will be some criteria in the selection of artists. In Sarajevo there are many good young artists, but they don’t have chances to exhibit. I also think that some of them have no guts, are not brave enough, just waiting for someone to give them a chance. I would like Brodac to be a trigger for them.

How do you plan to make money, to make a business out of it?

Right now I’m not too optimistic that I will be able to finance the gallery by selling artworks, but my goal is to develop an art market in the region. Art is not making money right now in Bosnia. Right now it’s possible to sell Bosnian art to foreigners but the truth is that, here in Sarajevo, where around 400.000 people are living, maybe only 10% of people are interested in art, in going to see an exhibition; only 1% of people from Sarajevo, maybe less, are interested in buying art. It’s our reality. The urgency is to establish an art market. We don’t have that. You can’t sell something if you don’t have a market for that. It’s logical. If you establish an art market, if you encourage people’s interest, explaining to them that they can earn money from buying art from young artists, so that they can grow and produce something sellable, the price will also rise. You can sell everything if you know how to do it. If we find a way to make people loving art, we will be able to sell it. I also hope we will receive support from the government.

What is your idea about the role of art in Sarajevo and in Bosnia-Herzegovina in general? And which impact can your new adventure at Brodac have within the society?

In the past few years I’ve been working hard every day, giving the best of myself. Society here have been through tough times, but bad things happen anytime and anywhere, right now as well. Art has always answers to this. Frustrating stories have been circulating a lot among people in the past twenty-five years. My colleagues and I have been working a lot, rolling up our sleeves without complaining. We made good projects, always try to do something unconventional. We are functioning as a group, but we are not a group, we have no name, we only have a statement against the education system because it’s not supporting us. We have connections with the Art Academy, but we had no space where to exhibit, so we decided to find our own places, occupying some abandoned buildings, bus station, public parks, and so on. We have experience now, some solid background for this gallery. Brodac will continue the story that happened before. Now we have the space, we will show people what we are doing.  We are the new generation, and without us, there will be no art scene. I’m being very realistic; the art scene here cannot be based only on one guy coming from France.

For the ones interested, here are the main information about the Brodac Gallery, Brodac 4 Street, Sarajevo. Exhibition opening on May 13th at 20:00 o’clock. Exhibition title: Reconstruction 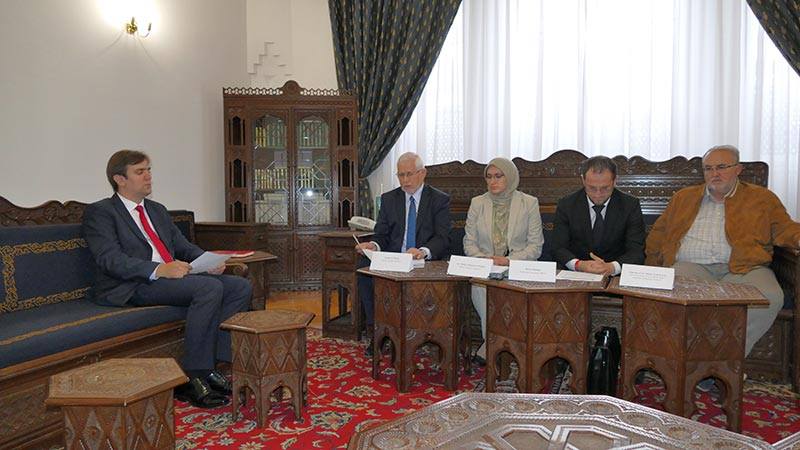