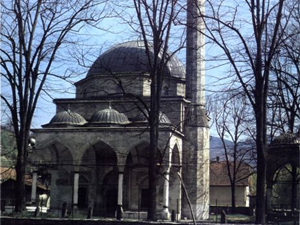 A master piece of Ottoman architecture, the Aladža mosque in Foča, which was built by a close associate of Mimar Sinan, Hasan Nezir, in 1549, will soon join the chain of memorial and cultural heritage pearls of Bosnia and Herzegovina.

This mosque was completely destroyed in August 1992 and construction works for its rebuilding officially began in Foča yesterday. This religious site is located in the old town in Foča on the right riverbank of Ćehotine River.

The director of the Waqf Directorate Sarajevo Senaid Zajimović confirmed to FENA that the works include the reconstruction of not only the Aladža mosque but also the Imam house in its harem.

“This is a novelty because we want to bring to life not only the mosque but also the Waqf facility which used to be next to the mosque and we will make a museum of all mosques in BiH in it while one part will be reserved for the Imam of the Aladža mosque where he will perform his duties.

It is true that works began in late fall and the winter is coming but we could have not begun earlier for objective reasons such as receiving a construction permit for the Imam house and the process of getting the documentation for the Turkish construction firm ‘Sama insaat’,” he said.

The first stage will include earthworks or excavations around the mosque and Imam house and this will last for up to a month. At the same time, efforts will be made for the processing and preparation of the original stone from which the Aladža mosque was constructed 500 years ago.

Zajimović underlines that the completion of earthworks and setting of foundations for the beginning of wall construction is to take place by the end of the year. However, if works are stopped due to weather conditions, their continuation was planned for early spring.

All construction works will be done under the supervision of the Commission for the Preservation of National Monuments of BiH since this is a national monument and a candidate for enlistment for the UNESCO World Heritage Site. Planner Amir Pašić, who worked on the Old Bridge in Mostar, is guided by the original designs of the mosque.

“We have drawings which date from the period when the mosque was built and we have found them at the Istanbul Archives and the Waqf Archives Directorate of the Republic of Turkey. The reconstruction will be as genuine as possible,” Zajimović said.

He also reminded that the original vakufnama of the Aladža mosque has not been found yet but only documents that point to it and its architectural details.

Besides the Commission, works will also be supervised by the General Waqf Directorate of the Republic of Turkey which is financing the project while three domestic companies from Mostar, Jablanica and Foča will perform works.

The exact values of the project will be known when the works are finished but the amount is assessed everywhere between five and six million BAM.

The deadline for the end of construction works is between a year and a half and two years and the opening of the mosque is to take place in May 2016.