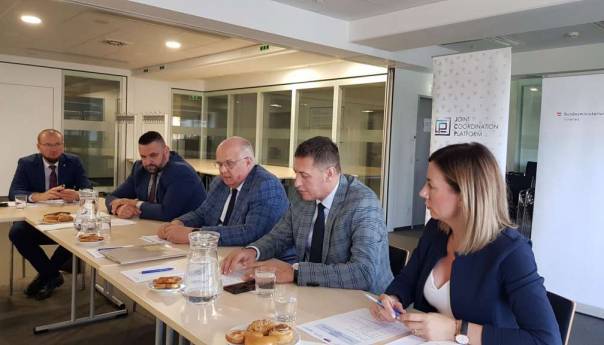 At a meeting in Vienna with Peter Webinger, Director General of the Directorate for Migration in the Ministry of Internal Affairs of Austria, representatives of the Ministry of Security of BiH, Sasa Kecman, and Deputy Director of the SPS of BiH, Mirsad Buzar, expressed their gratitude for the support of the Austrian Ministry of Internal Affairs, which in recent years has strongly supported BiH in strengthening the capacity for effective migration management. On that occasion, the continuation of the process of deportation of illegal migrants from BiH was discussed, and BiH’s plans in this area were presented.

The press release states that they discussed the continuation of support for the return of illegal migrants and the prevention of human trafficking. Significant support for BiH in the fight against illegal migration was provided by the Joint Coordination Platform (JCP).

Financial and technical support in the continuation of this process was discussed with JCP officials Berndt Korner and Sanja Selak-Ostojić. Also, the experiences of the Ministry of Internal Affairs of Austria in the use of the readmission case management system (RCMS), whose purpose is to speed up the identification of migrants, are presented.

Deputy Buzar pointed out that this system would be very useful for Bosnia and Herzegovina because it would significantly simplify and, with the use of biometric data, speed up the determination of the identity of persons illegally residing in our country, thereby significantly shortening the period required for their deportation.

Also, these topics and projects of common interest were discussed with the representatives of the Joint Operation Office (JOO), according to the statement.