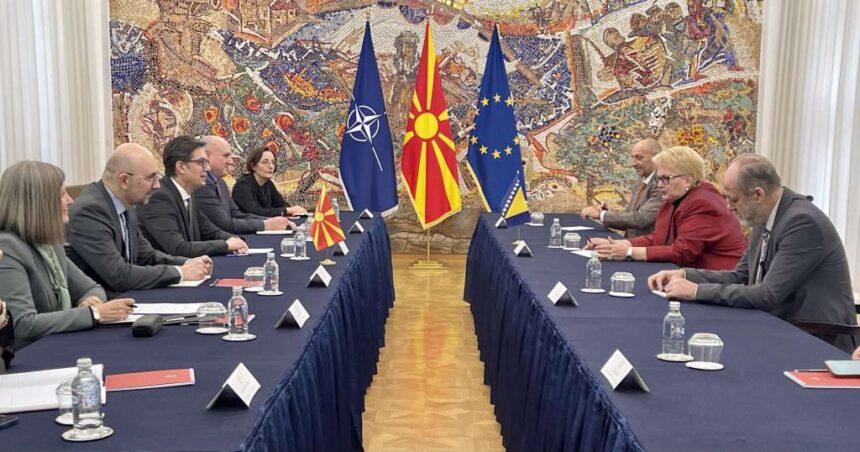 Minister Turković is on an official and working visit to North Macedonia with the aim of strengthening relations and regional connections.

After the meeting with Minister Osmani, a press conference was held during which Minister Turković pointed out that Bosnia and Herzegovina has no open issues with North Macedonia, but that cooperation can and must be much more intense.

“That is why today we talked about strengthening our ties, cooperation and the situation in the region of the Western Balkans in the new geopolitical circumstances. The ties are unquestionable, historical, cultural, ties between ordinary people are unbreakable and they cross all borders. It is also necessary to establish a functional framework for better road communication, and to strengthen economic connections. We have a number of bilateral agreements, but we lack the Sarajevo-Skoplje airline. It would be good if we sign the interstate agreement on economic cooperation as soon as possible, which we discussed today,” said Minister Turković.

”Both countries are often victims of some regional developments that affect our faster progress towards the European Union. In a certain way, our two states are connected by the fact that we were without an iota of guilt for the disintegration of the former state, and we suffered the most and most severe consequences,” the minister pointed out.

They also discussed the situation in the region and progress towards the EU.

“Bosnia and Herzegovina advocates regional cooperation within the framework of the Berlin process, with the aim of our connection speeding up the approach of the entire region to the European Union. That’s the direction we want to go. BiH achieved historic progress with its candidate status, and now is the opportunity to fulfill the remaining conditions to open negotiations on membership. It will not be easy, considering the political situation in our country,” Minister Turković added.

The officials of North Macedonia have expressed their readiness to strengthen relations and for concrete joint activities for the establishment of a regular direct flight between the two countries, the Ministry of Foreign Affairs of Bosnia and Herzegovina announced.

Prices of Industrial Products in the Federation of BiH recorded Increase
Next Article Will Bosnia finally see the Easing of Labor Costs and Wage Growth this Year?
Leave a comment Leave a comment