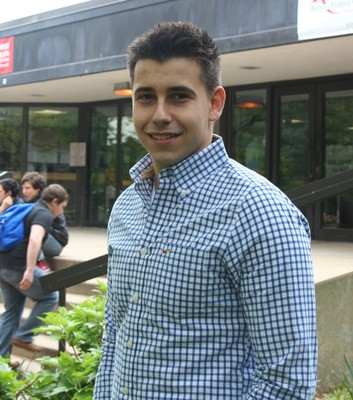 American news portal of the State University New Jersey has written an article about young Bosnian student who is realizing his American dream by studying law.

Alen Arnautović was nine years old in 2000, when his parents brought him and his sisters, Sejla and Lejla, to the United States in search of a better life. Since that time, he has gained an immense respect and appreciation for the rule of law in his adopted country, as well as the tradition of law that American society has in preserving the order of the peace, peaceful transitions of power, and the rights of its citizens to know that which they are entitled.

Arnautović now plans to enter a career in law, where he will have the opportunity to help preserve those cherished, time-honored values. He will take the next step toward fulfilling that dream on May 23, when he graduates from Rutgers–Camden with a bachelor’s degree in political science, with minors in criminal justice and national security. He has been admitted to the Earle Mack School of Law at Drexel University.

As he stands at the precipice of his future, Arnautović needs to look no further than his own past in order to appreciate the American rights and liberties that are so often taken for granted. As he recalls, he was only two years old when intense fighting erupted in Bosnia. In fleeting thoughts, he remembers playing soccer in the street and hearing the sounds of air-raid sirens or explosions. He recalls visiting a local hospital and witnessing the casualties of war. “They are those things that just stick with you,” says Arnautović, a longtime resident of Delran. “They aren’t clear-cut memories to the point where I can trace my steps, but they are snapshots, pictures of what I have seen.”

Arnautović’s adopted country would have an immediate impact on his young mind. He vividly recalls flying into New York and, like many countless immigrants before him, seeing the Statue of Liberty for the first time. Upon arriving, his first meal in the United States was a pizza. “And boy was there a difference,” he says. “I knew that I was in for a treat, and I knew that I was in for a new life here in America.” The family quickly made their way to Maple Shade and met up with Arnautović’s uncle, who had agreed to be their sponsor. Shortly thereafter, the family settled in Delran, where they have lived ever since.

Suddenly in a new home, in a new country, Arnautović was forced to mature beyond his years. As he recalls, he picked up English quickly and tested out of the English as a Second Language program after only six months. Meanwhile, his parents’ English continues to be limited, with Serbo-Croatian still spoken in the home. Consequently, since elementary school, he and Šejla have helped with a variety of bookkeeping tasks. “My sister and I have been busy filling out insurance forms, paying the mortgage or setting up a security deposit for an apartment we were renting,” he says, adding, “I believe that the pressure of real-life situations, the responsibility that I knew was going to be mine alone in the near future, forced me to grow and take my school work more seriously.”

In addition to these everyday reminders, Arnautović’s parents also stressed the importance of earning an education as a gateway to opportunity. “They would say, ‘Do you see what I am doing right now? This is not what you want to be doing for the rest of your life,’” says Arnautović. “That really stuck with me.”

As he progressed through Delran High School, Arnautović excelled in a number of courses that tend to go hand-in-hand with a law career. Honors English, AP History and civics subjects rounded out his expertise.  He was then encouraged by the vice principal, a former English teacher of his, to pursue the career, believing that it would be a perfect fit for his ability to connect with others.

At Rutgers–Camden, Arnautović maintained that same level of drive and determination. He is graduating not only with an overall 3.97 GPA, but with departmental honors as well. Among his other achievements, he was inducted into Pi Sigma Alpha, the national honor society for political science majors, as a junior. He also recently received the Jack Marvin Weiner Memorial Award, given to a Rutgers–Camden senior who has demonstrated academic excellence in political science. “All of these accomplishments have come to me as a shock, because I thought that you had to be an intellectual phenom to achieve them,” he says. “But I feel that Rutgers–Camden really makes things possible for those who work hard.”

Arnautović will now follow in the footsteps of Šejla, who was the first to graduate from college, when she earned a bachelor’s degree in biology from Rutgers–Camden last spring. Arnautović will also be the first in his family to attend graduate school. Meanwhile, his younger sister, Lejla, is still attending Delran High School.

As he steps closer to achieving his dream, Arnautović never loses sight of the sacrifices that his parents have made for their children to have a better life. “I know that I need to work hard,” he says. “I owe them that much – if not for me, then for them.”