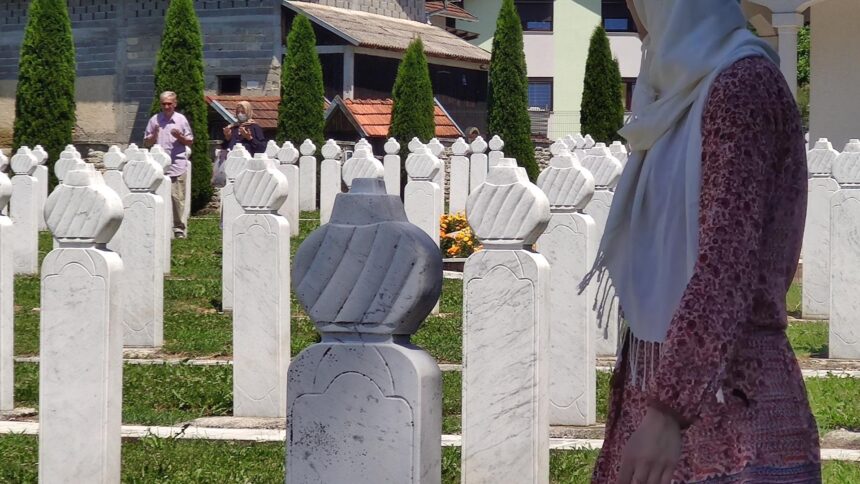 In the village of Biljani near Kljuc on July 10th, 1992, more than 200 locals were killed, most of whose bodies were found in two mass graves after the war. While still waiting for the direct perpetrators to be held accountable for the murders of 30 years ago, survivors recall their final moments with their husbands, sons, fathers and brothers.

Magbula Mesanovic watched her husband Hajrudin and son Admir get ready and go out from the steps of the family home in Biljani, while three soldiers were waiting for them. She does not remember what Hajrudin, a teacher at a local school, wore, because he quickly got ready and went out, but she remembers well every moment of getting her son Admir ready.

At that time, as a student of the Faculty of Electrical Engineering in Sarajevo, he came to the family house, on the door of which, like dozens of others in Biljani, three soldiers knocked on the door on July 10th, 1992.

“Ado told me: ‘Give me, mom, my boots,’ because he said he was going to Manjaca, ​​so he wanted to have good shoes. He was so beautiful, he had wonderful blue-grey eyes,” recalls Magbula, who watched him from the stairs.

”And he just looked at me. That look of his can never be erased. They just left,” Magbula describes the last meeting with her son and husband.

According to the judgments of the International Criminal Tribunal for the former Yugoslavia (ICTY), the men were taken to the local school, in the yard of which the first murders took place and where those brought were detained for a short time and listed, then taken out or taken away in buses and killed.

By mid-summer 1992, the residents of Biljani had already experienced incursions by the Serbian army and paramilitary formations weeks before, but the July 10th attack turned into one of the most massive crimes in Bosnia and Herzegovina (BiH) at the beginning of the war.

Before the war, Munevera Zukanovic lived in Biljani with her husband and four children, and she was among the women who were also ordered to go to the local school with the men.

The army, she says, was everywhere, and she saw them kicking out the doors of neighboring houses.

“They bring us here one by one – women and children, and men to school and home. We were there from half past six in the morning until half past twelve. That’s when the children and I saw him and we didn’t see him again. They sent us home so they could kill them,” noted Munevera, who identified her husbandafter he was exhumed in the mass grave Red Land (Crvena zemlja).

Residents of Biljani say that their loved ones were taken away by their neighbors, even though they heard that there were soldiers in front of the school who were not from that area.

“These are all our neighbors, here from Biljani. Maybe there was some foreign army, but I know who was knocking on the door – our people. I can’t say that I saw everything, but the few, maybe ten, soldiers that I saw were ours from our villages, neighbors,” says Amira Dzaferagic.

On July 10th, 1992, the secretary of the local community of Biljani, Raif Hodzic, had his father, who was 80 percent blind, taken away and killed, while he managed to escape into the forest when the army began to break into houses, from where he watched as the entire population was rounded up one place.

“Exactly 258 civilians were killed in Biljani in the period May – July 1992. Of that number, 248 men, 10 women and seven minors. The most people who died from one family – the late Mehmed Dzaferagic – seven,” told Raif.

The youngest victim in Biljani was the four-month-old baby Amila Dzaferagic, who was exhumed from the pit in Laniste on the last day, because investigators were afraid that her tiny body had not been removed with the waste, especially when the baby was found with a pacifier, Detektor reports.