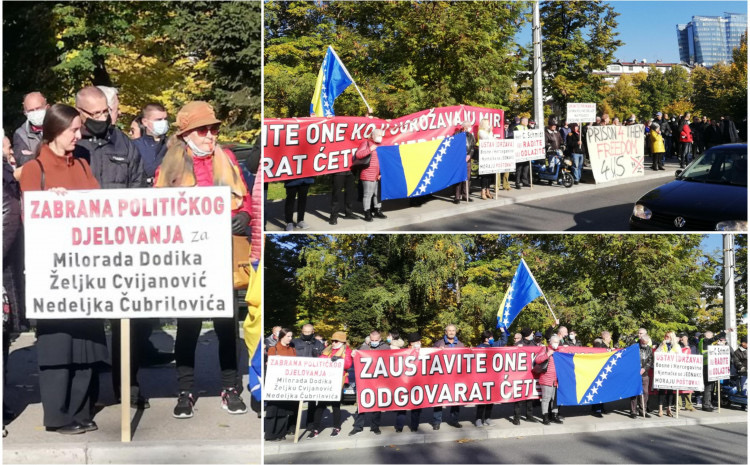 A group of citizens gathered yesterday in front of the Office of the High Representative (OHR) building in Sarajevo, and due to the current political situation in BiH, they are asking High Representative (HR), Christian Schmidt to react and protect the constitutional and legal order of Bosnia and Herzegovina (BiH).

The gathered citizens held banners that say “Stop those who threaten peace, you will be held accountable for inaction”, “Schmith, either work or leave”, and “Prohibition of Milorad Dodik’s political activity”.

Sejda Cavcic, one of the organizers of the protest, told reporters that the goal of this gathering was to invite citizens to come outto the streets and say “it’s enough” for all the events in the last two or three months in BiH.

“There is a blockade of the Council of Ministers of BiH, then these latest games by Milorad Dodik. Coming to the Presidency of BiH, which is our property, and he appropriates it as his own, brings the accordion, provokes, belittles the citizens, does not respect the Constitution of BiH, does not respect the Dayton Peace Agreement. As a member of the Presidency of BiH, he should fight for all peoples. It is also interesting that such a politically important person in the country has such a rudevocabulary,” Cavcic emphasized.

She also added that the international community must finally react to protect the constitutional and legal system of BiH.

“We expect Schmidt to hear our message and react. He is the only man in the international community who has the greatest power to dismiss these politicians within an hour. I hope he will hear and see us. That is why we have chosen the OHR, an institution that can react and remove these political retrograde forces in BiH, ” the protest organizer noted.

The gathered citizens explained that the OHR answered their inquiry and that they were supposed to talk to the OHR representatives yesterday.

Becirovic to Izetbegovic: Meeting in Belgrade would be a big Mistake, it is a Deceit for BiH
Next Article