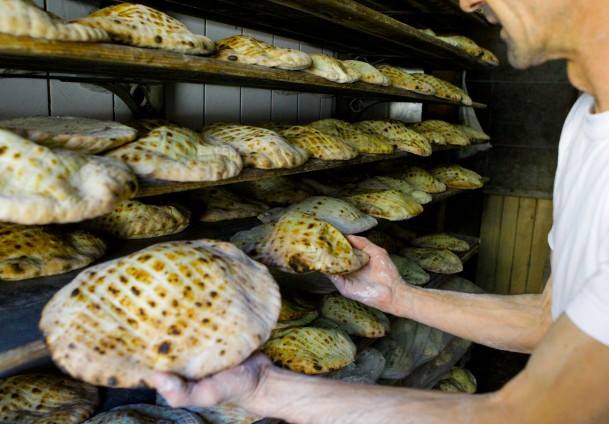 Somun is a kind of small bread which has an important place in the Ramadan menu in Bosnian tradition. Although they can always be bought in bakeries, somuni have the best scent in the time of Ramadan. That is why people say that the smell of somun is the smell of Ramadan.

Difference between the ordinary and the Ramadan somun is in the fact that Ramadan somuni are sprinkled with black seed, which gives a special flavor to somuni and whose smell simply lures people to stop by in the nearest bakery. In the Islamic world, black seed is a highly appreciated plant. Arabs call it Habbatul barakah (the blessed seed), because the prophet Muhammad PBUH, according to a hadith, stated that the black seed-black cumin contains a medicine for all diseases except death, and that this plant brings luck and prosperity. That is why black seed is generously sprinkled on somuni during Ramadan.

Although they originate from India, somuni came to BiH from Turkey, where this kind of bread is called pide, while in the western countries somuni and similar pastries are called pitta. According to Mufid Garibija, a famous Sarajevo architect and a good connoisseur of history of the city, first somun in Sarajevo was made by Gazi Husrev-Bey’s quartermaster whose last name was Somun, so this kind of “poor” bread was named after him. Somuni, the old Bosnian family of Ottoman origin, is still living in BiH and they are mostly concentrated in East Bosnia.

In Bosnia, there is centuries old tradition of making somuni. Although it is the simplest kind of bread which takes only flour, salt and water to make, real Ramadan somun can be made only by the masters of the craft. That is why every settlement has its bakery where the best somuni are made. There are several such bakeries in Sarajevo situated in the Old Town, between Baščaršija, Bistrik and Kovači.

Apart from dough, the fire on which somuni are baked also plays a role in the quality of somuni. There were attempts to bake somuni in electrical ovens, or ovens working on gas or oil, with the aim of modernizing the preparation and baking. However, practice showed that somuni are the best when baked in the old wooden stoves, and this is another reason why somuni are special.

Preparation of somun takes much more time that the baking. The dough is made with cold water and baked in very high temperature, amounting to 500 degrees Celsius. In such a high temperature, somuni are baked for 45 seconds to two minutes. Bakers use large wooden spatulas with long handles to put somuni in the oven and take them out.

Somun is a special kind of bread because it has a pattern on the upper side which resembles mušebak, wooden grid on the windows of female rooms in a Muslim house. Grids are made with a long metal bar wrapped in white cloth and are the same as they were in the time when Gazi Husrev-Bey’s quartermaster made them for the first time. It is not known why, but somuni are mostly kneaded and baked by men in all bakeries.

Many people wonder what the secret of Ramadan somuni is. Recipe for their preparation is very simple: flour, cold water, salt, pinch of sugar, yeast, black seed. So simple, yet so special. Somuni are still kneaded manually and prepared in the same way as centuries back.

In every somun there is a pinch of love by the baker who hurries to make as much somuni as he can in order to feed the buyers who, regardless of religion or nation, patiently wait in lines in front of bakeries to get their portion of somuni. Apart from the scent, real somun is also recognized by its look: slim, spongy and a little bit burned by fire. Do not be surprised when you see neighbors who travel from one part of the city to another part just to get somuni. Iftar is not the same if hot somuni are not on the table.

That is how it always was in Bosnia and how it will always be.

One Year passed since the Visit by Pope Francis
Next Article