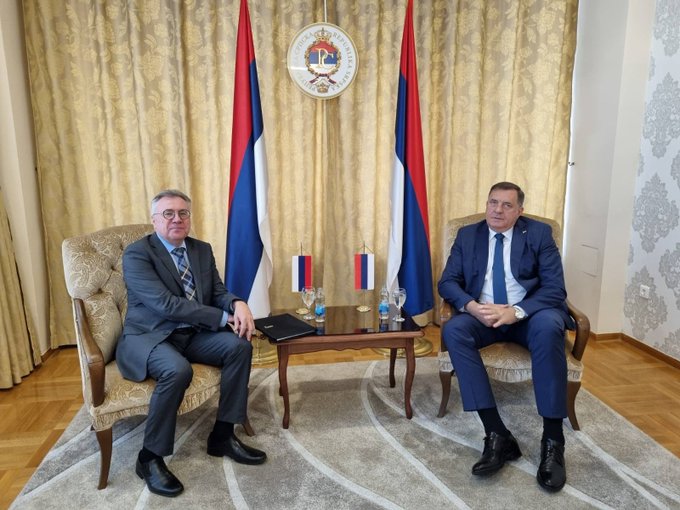 BiH Presidency member Milorad Dodik met today in Banja Luka with the Ambassador of the Russian Federation to BiH Igor Kalabuhov, where they discussed a number of current topics.

Among other things, Dodik and Kalabuhov commented on yesterday’s behavior of the high representative in BiH, Christian Schmidt, during the press conference after his visit to Gorazde.

Dodik told reporters that he informed the Russian ambassador that the situation in BiH is completely blocked.

“We see an enraged Schmidt behaving the way he is behaving. I see that he was saying that politicians are stinkers. I understood that it was them in the Federation of Bosnia and Herzegovina, not us in the Republika Srpska, he was calling us to drink some brandy,” Dodik said.

He added that he understood that Schmidt meant to say that those in RS are “good guys”.

“However, he still remains an illegal high representative. He cannot obtain his legitimacy that way,” Dodik said.

He revealed that he plans to travel to Russia again at the end of next month.

“I am preparing to travel to Russia again at the end of next month for a previously arranged meeting. I am also talking with Kalabuhov about how to solve the issues related to the gas pipeline. The Bosniaks in the Council of Ministers did not want to vote for this to be on the agenda after 12 years. As long as we are in power, and I believe we will remain, no project in Bosnia and Herzegovina will pass until the issue of the passage of the gas pipeline to Banja Luka is approved,” said Dodik, Klix.ba writes.