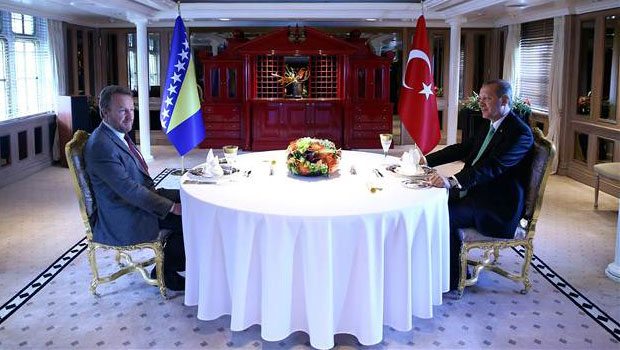 Turkish President Recep Tayyip Erdoğan has used the Savarona, the official yacht of the founder of the Turkish Republic, Mustafa Kemal Atatürk, for the first time ever to host a foreign leader.

Erdoğan was originally scheduled to meet Turkmenistan President Gurbanguly Berdimuhamedow aboard the Savarona, which sits moored along the Bosphorus, before hosting Bakir Izetbegovic, the chairman of the Presidency of Bosnia and Herzegovina, in the historic Mabeyn Mansion in Istanbul on March 4.

After Berdimuhamedow cut his Istanbul trip short to return to Turkmenistan to see his ailing mother, the Erdoğan-Izetbegovic meeting was relocated to the Savarona yacht. The two leaders and their accompanying Turkish and Bosnian delegations set sail on the Bosphorus at noon. The yacht was escorted by eight salvage tugs.

This was the first time the Savarona has been used for a state event after it was purchased by the Turkish Culture Ministry from businessman Kahraman Sadıkoğlu, who had bought it from the state in 1989 to use for tourism.

The historic yacht was bought back by the state after it was revealed in 2010 that it had been used for prostitution twice, as part of a police investigation into a crime ring.

The 136-meter yacht, with 17 luxury suites, was built in 1931 for the daughter of Brooklyn Bridge chief engineer John A. Roebling. It was then sold to Turkey in 1938.