In addition to meeting the municipal authorities, representatives of the EU Delegation to BiH, Ambassadors and diplomats will visit locations which suffered damages during the catastrophic floods in May this year, rehabilitated within the Floods Recovery Programme financed by the European Union.

During the visit, Head of Cooperation at the EU Delegation Melvin Asin will officially open the Elementary School “Meša Selimović” and the Vocational Secondary School “Janja” in Janja, both rehabilitated within the EU Floods Recovery Programme. He will also announce the five recipients of EU grants from the Bijeljina Municipality, which will receive financial support, under the EU Floods Recovery Programme, for the recovery of their enterprises affected by the floods. 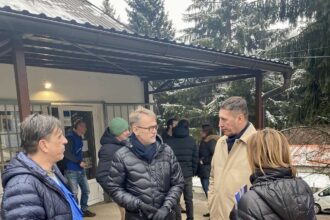