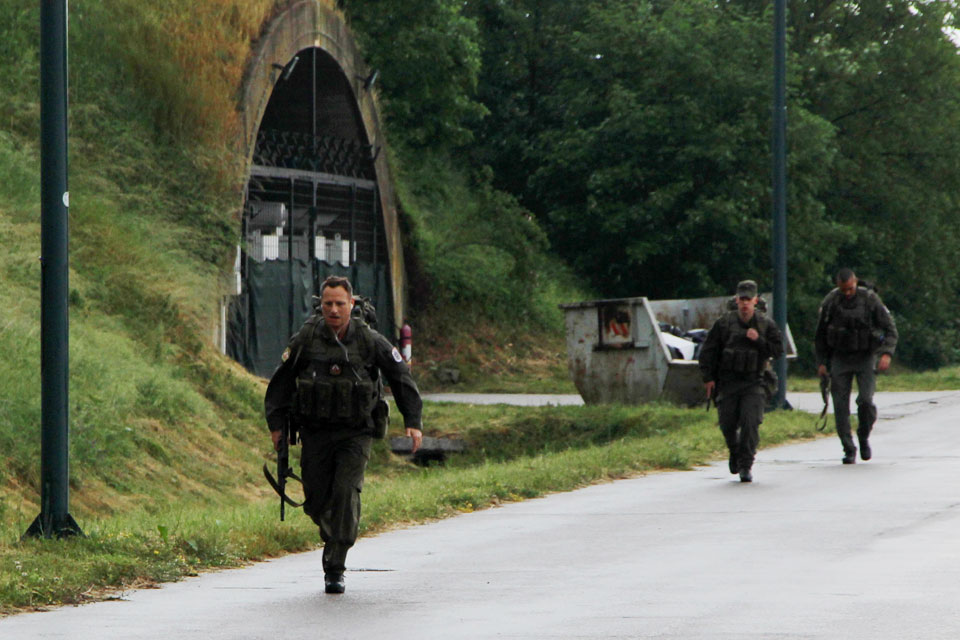 On 20 May 2020, in torrential rain, members of the Austrian Company of EUFOR’s Multinational Battalion carried out a mandatory test of their fitness, proving that they are battle-ready.

The military specific fitness test of the Austrian Army is designed to simulate situations that a soldier may find themselves in when called into action in the field. The test is broken down into two parts. The first is a 3.2km speed march, carrying approximately 25kg of weight (including rifle), simulating strength and endurance when marching. Each soldier must complete this phase in the fastest time possible and in less than 29min 32s.

The second is a course designed to simulate several activities; moving in the field over approximately 100m, including a 10m seal crawl; pulling a 50kg dummy over a distance of 40m simulates dragging a casualty to cover; carrying two 18kg water canisters over a distance of 100m simulates carrying a stretcher; and lifting a 24kg load five times onto a platform of 125cm in height, simulating lifting a casualty into a vehicle. These tests are conducted concurrently and need to be completed in less than 4min 15s.

The start of the speed march was at 0800. The first soldier across the finish line took 20min 5s to complete the task, with the last soldier crossing the line in 27min 27s. The second phase was at 1000, after a small amount of recovery time, the fastest time was 2min 2s and the last man took 2min 53s. All soldiers taking the test passed without a problem and were either soaked by the rain or through sweat!