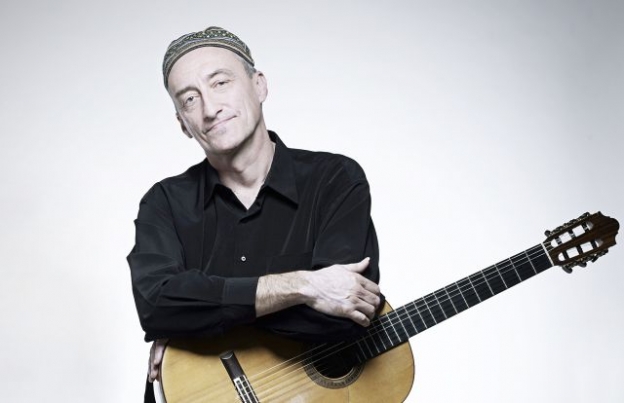 Miroslav Tadić (1959) was born in Tuzla. After his studies in Italy and ex-Yugoslavia, he completed his formal education in the USA. He recorded and performed a broad spectrum of music styles; from baroque music, classical period to blues, jazz and rock. His performances and records include projects and cooperation with some world famous musicians such as Terry Riley, Los Angeles Opera and Placido Domingo, Dušan Bogdanović, Maria Joao, Jack Brus from the band Cream, the drummer Mark Nauseef and of course, Vlatko Stefanovski and Rade Šerbedžija. The editors of the “Guitar player” magazine declared Miroslav Tadić in one of their editions as one of the 30 most individual and radical world famous guitarists.

We spoke with Miroslav Tadić on the occasion of his visit and performance at the upcoming 18th edition of the Jazz Fest Sarajevo to be held in the first week of November. As a world famous guitarist, Tadić shared with us his expectations from the Bosnian audience, his impressions about the Bosnian music production, about sevdalinka, his first encounter with the guitar and his future work plans.

Miroslav Tadić is one of the best world guitarists. His performances, fascinate audience all around the world.  Originally from Tuzla, this versatile artist and guitar professor is known here mostly by his cooperation with his music partner Vlatko Stefanovski. He also worked with Rade Šerbedžija and has a truly respectable discography behind him.

NV: You have been playing all around the world. Today you will hold a concert within the Sarajevo Jazz Fest. What are your expectations from the audience and how does it feel to perform in front of your own audience?

It’s a great pleasure for me to perform again at the Sarajevo Jazz Festival. Sarajevo and its audience are truly dear to me. They always inspire me to give my best.

NV: It looks like the jazz oriented audience is B&H is getting bigger every year. Tickets are always sold out. What is it that attracts people to jazz and who are those people?

We owe it to the Sarajevo Jazz Fest which holds a high level of quality for years and offers a program bringing some great names in jazz music and music in general. The number of listeners is increased because it’s easy to recognize quality and besides, a good reputation, like to one this festival has, spreads quickly. Good music knows no boundaries, so the audience is diverse; all generations, all kind of professions.

NV: We know Macedonian music has a special place in your heart. Where do you keep Bosnian music, especially sevdalinka?

The Bosnian sevdalinka is very dear to me too and I enjoy listening to it although I don’t perform it so often. It’s a very demanding type of music and hard to play on any instrument because it’s the singing and the poetry that matter most when it comes to sevdalinka. Still, at the concert in Sarajevo, we will perform a beautiful sevdalinka called “Kraj potoka, bistre vode” (“By the creek, clear water”) and we hope the audience will give us a passing grade.

NV: Nowadays it has become much more important to ensure your own existence than to create quality music. The result of it comes in a form of all kinds of low-quality music. Where has the good music gone?

Everyone has a right to have his own music taste. There is so much music available to everyone through the internet, Youtube etc. today. All those who wish to hear good, interesting, creative music can also find it and that’s why I am rather optimistic. It’s important that it exists and that it’s available to all those who need it.

NV: Your origins are from Bosnia and Herzegovina. Is there enough quality schools for future musicians here, especially guitarists? What steps should be made in that context?

I really don’t know enough about the music education in B&H so it would be inappropriate for me to make comments about it. However, I can proudly say that I know some truly excellent guitarists who are also from my hometownTuzla, among which my dear friend and world famous guitarist Denis Azabagić. He is a role model for many young and talented Bosnian musicians.

NV: Music and songs should connect all kinds of people. Still, in our region, it sometimes serves to arouse nationalistic tensions. There are still many authors who spread nationalism and hatred through their music. How can we make it stop?

I believe there are more musicians reconnecting through their work our people and showing them that there are more resemblances than differences between us. For me, connecting people and the therapeutic effect the music has, have always been the most important part of the artistic work. The part which demands most responsibility.

NV: You cooperated with many world famous musicians. Which of those experiences most affected you?

I really had a chance to have been working, and I still do, with many truly remarkable musicians and artists across the world. Each one of them is a special kind of universe, extraordinary constellation. I cannot point someone out. Everyone gave me something and I learnt something precious from each of them, something to keep for a life time.

NV: Is there any Bosnian musician that you would like to perform with more often?

I am working these days on a new project with an accordionist Merima Ključo and this cooperation brings me much joy and satisfaction. Besides folklore themes from B&H, Macedonia, Bulgaria and Serbia, we also play music of Bartok, De Falla and Satie in our own way. By the end of the year we will have our first CD ready for publishing. I truly hope we will soon have the chance to present this project in Bosnia and Herzegovina.

NV: Your first experience with a guitar?

My father Zoran wasn’t a professional musician but he sang very nice following himself on a guitar so this instrument was beside me from the first day of my life. As a baby I played with it, but it wasn’t until I was fourteen that I seriously started playing.

NV: Did you spend lots of money on guitars?

Luckily, I am not much of a guitar collector; I play one, “main” guitar for fifteen years now. It’s a high-quality instrument made by a Spanish master Manuel Bellido but it’s not extremely expensive. I also play electric guitars that I make on my own so the only costs are those for the material and the tools.

NV: How much time do you spend with a guitar during the day? How much did you used to spend?

Guitar is a part of my everyday life for over forty years now. Besides practicing, performances and recording, I hang out with it while working with my students too. Making guitars is my hobby so it’s one more way to be around it. Still, from time to time, I need to take a break and then I don’t touch it for two weeks, but that’s rare.

NV: How do you relax?

Since music makes a great part of my everyday life, I like to rest in silence, to “purify” a bit my ears and my head. For example, when I’m driving, I rarely listen to music. I love to cook, I have a garden where I spent many hours of free time, and I also like to do little practical things in the house. Those are small pleasures which mean a lot to me, it brings me peace and charges my batteries for new music ventures.

NV: We believe you had some good and bad experiences in your carrier. Who helped you most and where did you turn for motivation and inspiration?

My parents. They were both artists and had lots of understanding for my desire to become a musician, that’s why I always appreciated their support. But I can’t say I had some serious “downs” as a musician. During some hard situations in life, like losing a friend, parent or divorce, music always lifted me and restored my optimism, faith, hope and will to live.

NV: What are your future plans (albums and concerts)?

The CD “Balkan Fever” was just released. It’s a CD recorded by Vlatko Stefanovski, Teodosij Spasov and me as soloists, along with the Leipzig Symphonic Orchestra. As I already mentioned, I’m doing a CD with Merima Ključo as well. I recently started to work with Rambo Amadeus too. I had many concerts with Teofilović brothers last summer so we plan to do that next year too. Also, my long-term cooperation with Vlatko Stefanovski continues as well.

NV: At the concert you will present the joint project entitled “Vidarica” you made with the Teofilović brothers. What is it all about?

I have been fascinated by the human voice for years. I found great partners in the Teofilović brothers. Our repertoire covers a great part of the former Yugoslavia and celebrates the richness and diversity of traditional music of our region. I introduced many other music influences too into our arrangements like for example blues, jazz, flamenco and classical music and I believe we found an exciting and original music expression which shows a great respect towards tradition. The title “Vidarica” refers to the therapeutic effect the music can have on people, one in which we deeply believe.