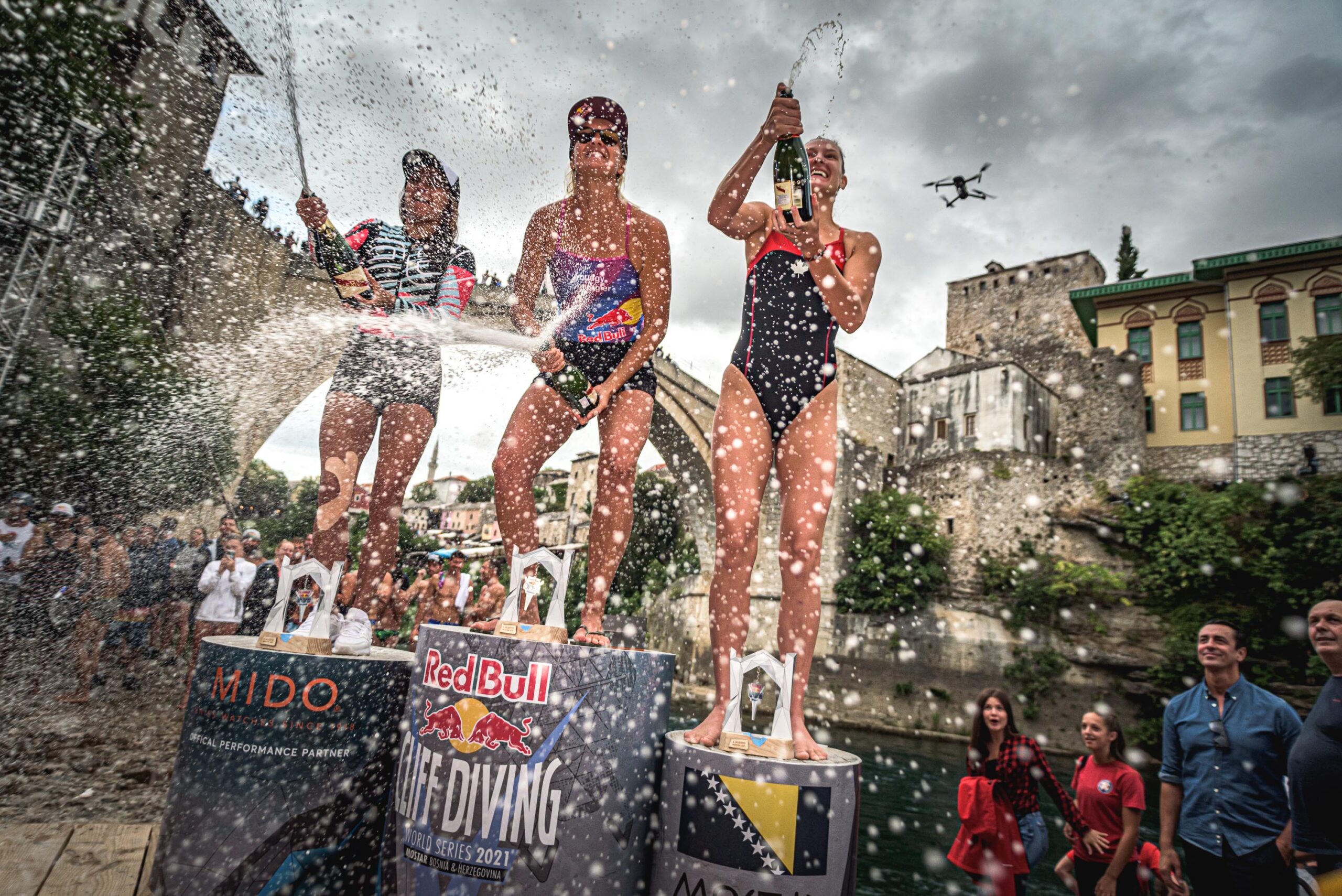 Rhiannan Iffland continued her remarkable winning record at the third stop of the 2021 Red Bull Cliff Diving World Series in Mostar, Bosnia & Herzegovina, extending her streak to 10 victories in a row across three seasons. In the men’s competition, Gary Hunt returned to the top of the podium for the first time this season, fending off the late challenge of Constantin Popovici to post his third win at Stari Most.With the bad weather forecast for Saturday, competition organisers had decided to add an extra round of diving to the program on Friday afternoon, ensuring that the three dives required for a competitive result were completed. Fears of a fourth-round washout soon faded, though, as the clouds cleared and action got underway.Already holding a 37-point lead over her closest challenger going into the final round, Iffland dispatched another precise dive into the Neretva River to not only secure a record-extending 10th win in a row; but also surpass her own record competition score, Red Bull writes.

“I was wondering if it was a personal best score,” said the four-time champion, who also became the first woman to win twice here. “I was coming in today with quite a lead, so that was my goal to push that personal best score higher. Next time I’ll try and do it again.

“It’s always hit or miss here in Mostar. It’s very difficult to dive from a bridge. The visuals are different. For me, it’s much scarier than a lot of other locations. It just comes down to who performs on the day and who copes with the nerves and the pressure.“Tenth win in a row. One thing I was saying earlier about ten wins in a row is that I grew to like the pressure. That’s one thing that’s come out of it. I’m stoked, so now I’m ready for more. Let’s make it eleven.”Mexico’s Adriana Jimenez showed no signs of rust on her first appearance in over two years, executing one of the day’s best dives in the final round to earn a second place finish. Completing the women’s podium was Canada’s Jessica Macaulay in third place.

Without a win in 2021 coming into this stop, Hunt had spoken openly earlier in the week about the double threat posed by rivals Popovici and Catalin Preda this season. The two Romanians faltered in the rain on Friday, however, and despite Popovici’s sensational final dive, for which he picked up two 10s, Hunt remained calm and composed at the end to claim a 40th World Series win and his first as a Frenchman.

“40 wins, it sounds great!” said Hunt. “There are so many experiences I’ve had on this wild ride and every single one means a lot to me.“Standing on top of the podium with the La Marseillaise is something special.“The title is open, absolutely. It may have looked like the Romanians fight hard, but I’m fighting hard as well.”The Russian wildcard Nikita Fedotov, joining Hunt and Popovici on the podium, served up a repeat of his debut here in 2017 to finish third.

Kapljuh is a rare Breathtaking Phenomenon in Bosnia!
Next Article