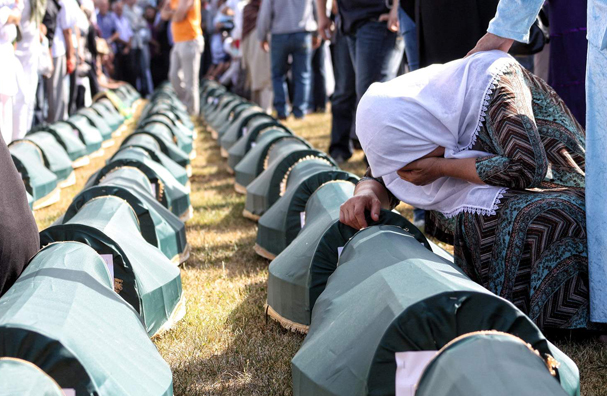 The Institute for Genocide Research of Canada (IGK) issued a statement on the moves of members of the Youth Organization “Princip” who submitted a request to the Prijedor Police Department to organize a gathering on May 31st, where they plan to celebrate the 58th birthday of Hungarian Prime Minister Viktor Orban and the 55th birthday of Pink TV owner, Zeljko Mitrovic.

”This is an obvious provocation because that day marks the Day of White Ribbon in memory of the victims of horrific crimes against Bosniaks and Croats in Prijedor.”

102 children among the killed people

In order to commit genocide in Prijedor, which was proven byscience, antagonisms and hatred were needed, which members of the Youth Organization “Princip” show 30 years after the self-proclaimed authorities of Republika Srpska (RS) in Prijedor issued an order on May 31st, 1992 via local radio that the non-Serb population mark their houses with white flags or sheets, as well as put a white ribbon on their right hand when leaving the houses.

This extremely humiliating act was confirmed by members of the European Monitoring Mission, who noticed white flags on Bosniak and Croat houses in the vicinity of Prijedor in August 1992, so that they could be distinguished from Serb ones.

In order to justify the genocide, the organizers of the joint criminal enterprise had to start the dehumanization of Bosniaks and Croats in Prijedor, so that their act of a wide range of crimes would look not like a crime, but as an alleged honorable, heroic deed, because according to that opinion, it is a clash with “badpeople”, who should be exterminated so as not to infect the rest of the “civilized” world. The genocide in Prijedor began with such prejudice.

The announcement of anti-civilization, public birthday celebrations on the day when the whole world pays tribute to the victims of Prijedor in the civilization campaign of the White Ribbons is a clear proof of the continuity of the fascist idea reflected in the mass violation of basic human rights and freedoms of refugees and returnees, as well as survivors of genocide victims and witnesses.

It is important to note that the frustrated municipal authorities of Prijedor never publicly acknowledged the actions of the then fascist authorities and expressed remorse for the suffering that thousands of Bosniaks and Croats went through and offered a hand of reconciliation and repentance. On the contrary, the Prijedor ruling establishments regret that the issue of “undesirable, unpopular elements”, Bosniaks and Croats, has not been completely resolved.

Relations that are already bad are worsened

The IGK called on the Prijedor Police Department to ban this gathering as it insults the victims and further disrupts the already damaged ethnic relations in Prijedor.

”We call on all political, academic, and legal individual and collective subjects aware of truth and justice, and all fighters for the protection of human rights and freedoms and their organizations and communities to oppose the dehumanizing celebrations of these birthdays on the day of Prijedor suffering.

When will BiH receive a new Law on the Prevention of Conflicts of Interest?
Next Article