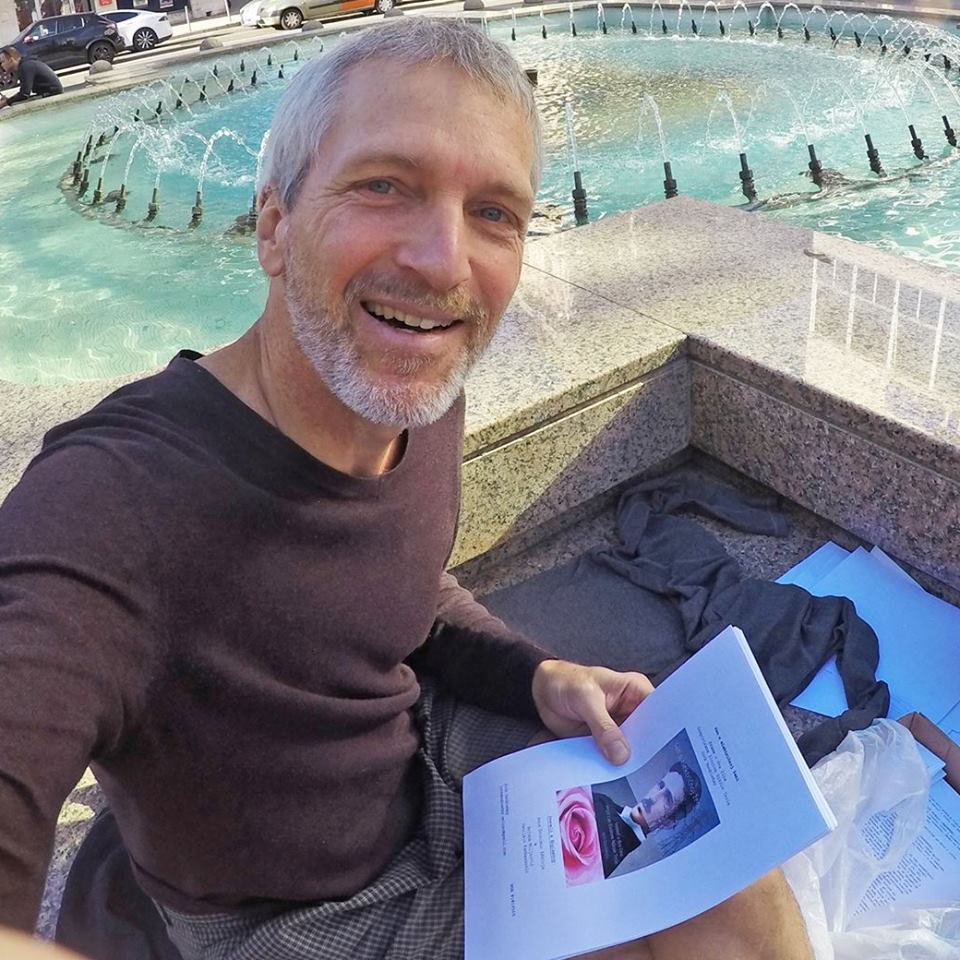 In 2005, in a little Bosnian town of Visoko in central Bosnia and Herzegovina (BiH), Mr. Semir Osmanagic claimed to discover the first pyramids on the European soil. Can you tell us how that discovery came about?

Jock Doubleday: After many years of pyramid-related adventures around the world and after writing many books on the subjects of both ancient history and ancient megalithic technology, Dr. Semir Osmanagić, Ph.D. (Americanized as Dr. Sam Osmanagich) was visiting  Visoko, Bosnia in April 2005. He noticed the smooth triangular face of the northern slope of Visočica brdo (Visocica hill), and wondered if that smooth-faced pointed hill might be an ancient pyramid. Knowing that ancient pyramids are almost always oriented to the cardinal points, he took a compass reading and found immediately that the north side was correctly oriented to cosmic north. Encouraged, he proceeded over the following weeks to gather topographic, geological, archaeological, and other scientific data.

Eventually Dr. Osmanagich discovered 10 ancient structures in the Visoko area — in what he termed the Bosnian Pyramid Complex:

1)  Bosnian Pyramid of the Sun

2)  Bosnian Pyramid of the Moon

4)  Bosnian Pyramid of the Dragon

10)  Ravne Tunnel Labyrinth (Levels 1 and 2) (previously undiscovered/unexcavated; filled to the brim with loose sand and river stones an estemated 4,600 years ago so as to be virtually undetectable)

Anyone who wants to find out more details about Dr. Osmanagich’s astonishing discovery, and to read the story of the archaeological orthodoxy’s bold attempt to shut down the Bosnian Pyramids Project, can visit my article, “The Mysterious Anti-Scientific Agenda of Robert Schoch – Part 1: The Bosnian Pyramid Complex.”

The discovery by Mr. Osmanagic has revealed the existence of large tiled surfaces all around the pyramidal structures. Is there any supporting evidence to his claim? Could you please tell us your impressions and describe the research techniques you used?

Jock Doubleday: Excavation is the primary technique in archaeology. Dr. Osmanagich and his various teams have excavated many stone terraces from beneath a meter or more of softer construction clay, for instance at Vratnica Tumulus (where the stones are truly megalithic) and the Bosnian Pyramid of the Moon (where four artificial stone terraces have been revealed on the western face of the structure). These inclined stone terraces are composed of artificial baked claystones that were beautifully textured and intricately laid down by an advanced culture about whom we know virtually nothing.

All around the Bosnian Pyramid Complex, after significant excavation by Archaeological Park Foundation employees and volunteers, hard baked claystone layers (structural terraces) are found to be inclined (for structural strength) into the face of the structure in which they are found. All of these stone terraces in the Bosnian Pyramid Complex have been found to be 1) leftward-leaning or rightward-learning and 2) inclined into the structure. Always, these “tiled” stone terraces spiral steeply up the structure.

How do huge structures like the ones in the Bosnian Pyramid Complex survive the millennia? The ancients alternated each artificially created hard-claystone layer with a meter or more of softer clay. This soft clay is perfect for mitigating the kinetic energy from earthquakes. (The soft clay allows the structure to withstand strong earthquakes that would take down a structure composed solely of hard material.) And the hard stone layers give shape to the softer clay.

The stonework artistry of the ancients should also be mentioned. The ancients’ structural stone layers are composed of artificially created baked claystone (also called “sandstone” by some researchers, although the clay is the key binding element and usually the major element in the artificial stones in question) were artistically rendered by an unknown culture in the distant past. By “artistically rendered” I mean that these stones were individually 1) sculpted, 2) textured, 3) heated, and 4) placed with extreme care. The stones are both beautifully crafted and beautifully placed to create absolutely gargantuan and long-lasting structures — pyramids, tumuli, and hills — although, as I have mentioned, these stones were never meant to be seen.

Why did the ancients take such care in the creation of beautiful stone layers? No one knows. The mysteries of the Bosnian Pyramid Complex abound. Thirteen years after the discovery of the pyramid complex, there are many more questions than answers, though the droves of scientists who are studying various features of the pyramid complex are amassing data on a weekly or monthly basis that may give us real answers soon.

“Moon” and “Sun” pyramid. Is it only speculation? What else could this mystery hide apart from the vast labyrinth of underground tunnels?

Like pyramids in other ancient complexes around the world, these two gargantuan structures have 1) triangular faces, 2) orientation to the cardinal points, 3) a prehistoric tunnel network beneath them, and 4) they are found near running water. (The  Bosnian Pyramid of the Sun, in fact, stands at the confluence of two rivers: the Bosna and the Fojnica.)

However, the Bosnian Pyramid of the Sun — the  tallest documented pyramid in the world — is a very special kind of pyramids according to various measures: 1) shape 2) construction materials, 3) construction process. The geometrical shape of the Bosnian Pyramid of the Sun, is that of a three-sided triangular pyramid (like Rtanj Mountain in Serbia).

It is also a paired pyramid: it is knitted together at the base and up along its southern side by an alternating clay and concrete staircase.

Further, the ancients created an “access ramp” or “access plateau” that meets the Bosnian Pyramid of the Sun from the west. This highly built up and structurally strong (and frankly gargantuan) ramp fully connects the pyramid to the surrounding hills. In this way, the ramp might be thought of as more than a ramp: very possibly an electrical conductor, or conduit, allowing the Pyramid of the Sun to receive extra energy from the hills, in addition to the earth energy from beneath the pyramid’s base.

What is the Bosnian Pyramid of the Sun doing with all of this earth energy? Scientists like Harry Oldfield and Goran Marjanovic are working on the answer to that question.

Speaking about pyramids creates an ever increasing interest among our readers, as almost every week we hear about new exciting findings. Could you update us on the current situation?

What’s interesting about the ancient race or races that built the pyramid complex is that they didn’t build with only one kind of material or with only one kind of block or with only one style of construction. Building methods and materials vary from structue to structure. The Bosnian Pyramid of the Moon is composed of clay and claystone layers, and the Bosnian Pyramid of the Sun is composed of clay and claystone layers plus four layers of concrete on the top of the pyramid (which itself is covered with a few centimeters or more — up to a meter — of construction clay and naturally accumulated soil).

Tourists visiting the Bosnian Pyramid Complex usually make it a point on visit Ravne Tunnel Labyrinth, for instance, one of the most healing places on earth (video: start minute 4:06). High levels of health-promoting negative ions, high levels of oxygen, the complete absence of DNA-damaging cosmic rays, the complete absence of health-damaging energy grids such as Hartmann grids, Curry grids, and Schneider grids — all of these aspects add up to a super-healing environment for Ravne Tunnel visitors. Indeed, even the water from Ravne Tunnel is very high-energy healing water. You can see how pure it is in the water channels created by the ancients in side-tunnels leading off from the main passageway in Ravne Tunnel.

On March 26 2017, I asked Dr. Osmanagich what he wanted for his birthday on June 1. He didn’t say a new SUV, a bigger house, or more money. He said, “I want people to come to the pyramid complex.” I said “Why?” He said, “I want to facilitate their happiness.” If health = happiness, then Dr. Osmanagich has certainly facilitated a lot of people’s happiness. This man, who cares about others, is the man who was chosen by destiny to discover the Bosnian Pyramid Complex.

Jock Doubleday is a writer, researcher, stoneworker, and videographer. For 16 months in 2014 and 2015, he worked as official videographer for Archaeological Park: Bosnian Pyramid of the Sun Foundation, a nonprofit Bosnian NGO foundation created by Dr. Semir Osmanagich on November 9, 2005 in Sarajevo, Bosnia-Herzegovina. Doubleday’s articles on the Bosnian Pyramids, and on other ancient megalithic monuments and civilizations, can be found at https://anamericaninbosnia.wordpress.com/ and at http://anamericaninbosnia.blogspot.com. Some of his videos about the Bosnian Pyramid Complex, especially those shot in 2014 and 2015, can be found at https://vimeo.com/user29144093. Most of his archaeology-related videos can be found at http://youtube.com/BosnianPyramids. For daily updates on archaeological progress in the Bosnian Pyramid Complex, please feel free to visit the Facebook page he administers, https://www.facebook.com/SemirOsmanagich. This Facebook page also gives information on ancient history in general as well as the newest science (“electric universe”). His books, “Paradigm Shift: The Gradual Awakening of Science to the Possibility of Advanced Human Civilizations in the Distant Past: The Bosnian Pyramid Megacomplex,” and “Who Built the Earth? An Exploration of Geological, Geophysical, Seismological, and Astrophysical Evidence for an Earth Constructed by an Advanced Race or Races in the Distant Past,” will be published soon.