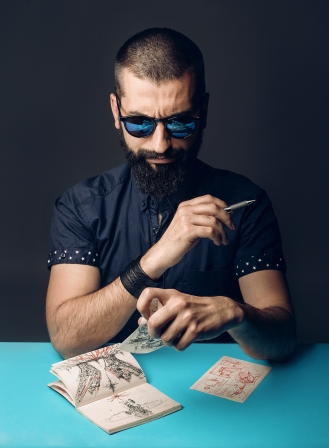 Enis Cisic, is an illustrator and graphic designer from Sarajevo, who several years ago has recently released his first comic book for Marvel Comics, one of the most famous in the world.

“I am a creator from Sarajevo who decided to do only what he likes,” Mr. Cisic starts the conversation.

On a question what an artwork should communicate and is it necessary for it to have a message, Mr. Cisic answers that an artwork represents a product of a certain charge, creative energy that is made in the process of work, and the artwork should transfer that energy. It should contain the experience of the artist as well as his ability to solve some artistic problems.

“If you are engaged in visuals, I think that you should have some experience in drawing,” Cisic adds.

“My way of expression is through a visual narrative such as comic books and illustrations, and thus I prefer a good harmony of ideas and well-practiced crafts. I prefer the experience through which you learn about arts, aesthetics. I have to admit that I am not really interested in visual works whose only significance is in the idea and the message, that does not make me feel anything special. On the other side, if the work is done well just as the craft and does not have any message, then it loses its value.”

Mr. Cisic continues by telling the story of how he started reading Marvel comics when he was in elementary school. He was lucky that his parents were buying him comics such as Konan, Horor (also  Marvel), local comic books that included Silver Surfer, Punisher, Spiderman and other Marvel characters. Back then, comic books were not screened a lot, so he started making up his own films as a child and he realized later that he wants to deal with comics. He was learning to draw with the works of the productive artist of Marvel, John Busceme. Therefore, Marvel represents a realization of my childhood dream and now that I have fulfilled it, I can move on. I have other dreams as well

Sarajevo Times: On the topic of Marvel, what is the mission of an illustrator and what is his superpower?

“His primary mission, most probably, is to satisfy the market, editor and loyal fans. On the other side, I as a creator can be a child who is paid to play around. That was my personal feeling, I used to draw Spiderman as a child and now I have the chance to draw him for a salary. When you work for such a large publisher, you are a part of a machine, your superpower is to respect the deadlines and still maintain the quality of your work. Not everyone can do it.”

Comic books are a great way of a creative program and they can encourage children to read and make up their own stories. A visual narrative can also be an interesting way of learning and it can also help in building visual memory.

Regarding the question on motif of BiH through illustration, Mr. Cisic answers it can be a tecak tombstone, adding that he worked on illustrations for the book about stecak tombstones that was written by Gorcin Dizdar for the publisher “Vrijeme”. That was a great experience and he had the freedom to use his imagination and do the illustrations in a bit different way than expected. The book is coming out this month.

Sarajevo Times: Do you think that drawing is a skill that you learn or you are just born with it?

“Drawing is a skill that you learn, you are born with a larger or smaller ability to observe the world. The first thing that you learn in drawing is not how to draw a line but to observe the shapes in nature. The act of drawing itself, however, starts with the idea in your head and thus practicing of visual memory is very important for every artist,” Mr. Cisic explains.

On a question of when one can say that a drawing a good drawing, Mr. Cisic answers “when it is the product of the previous 10,000 drawings and when it becomes your signature.”

Mr. Cisic had an opportunity to work and draw a cover page for “La Tettura”, one of the most important European cultural magazines. All of that happened thanks to Haris Pasovic, BH director who became director of the great Italian theatre festival “Mittel Fest”.

The topic of Haris Pasovic’s theater show was “What would you give your life for?” The illustration takes inspiration from that question and shows four young men in flames. It is a metaphor for the great potential and strength of young people who can become just like Prometheus. They can bring knowledge and energy to the future; but if we do not accept them, they can become dramatically destructive.

Speaking about BH cultural scene, Mr.Cisic says that the situation is not great but that he will use the opportunity to mention those who are struggling to make everything better.

“I would also like to mention the Comic Book Review in Laktasi, which is led by my friend Milorad Vicanovic Maza, the most productive comic book artist from BiH. He worked on numerous comic books for French publishers.”

Sarajevo Times: What do you find inspiring?

“A lot of things. I like photography and music in the movie. I like to draw human figures, anatomy and dynamics of movement so I am interested in theater. Moreover, the pop culture of the 1980’s is my main source of inspiration, and the things that inspired me as a child are still interesting to me.”

Sarajevo Times: What are you working on at the moment?

“One great comic book project on 80 pages that talks about the beginning of rap music in Harlem in the 1960’s. The atmosphere is in film noir style, which is very interesting from the graphics side.” 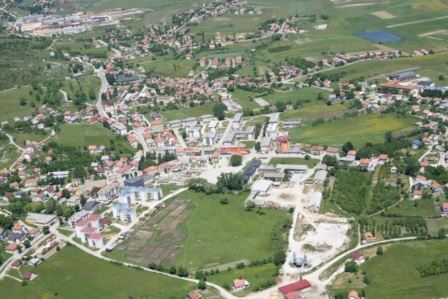