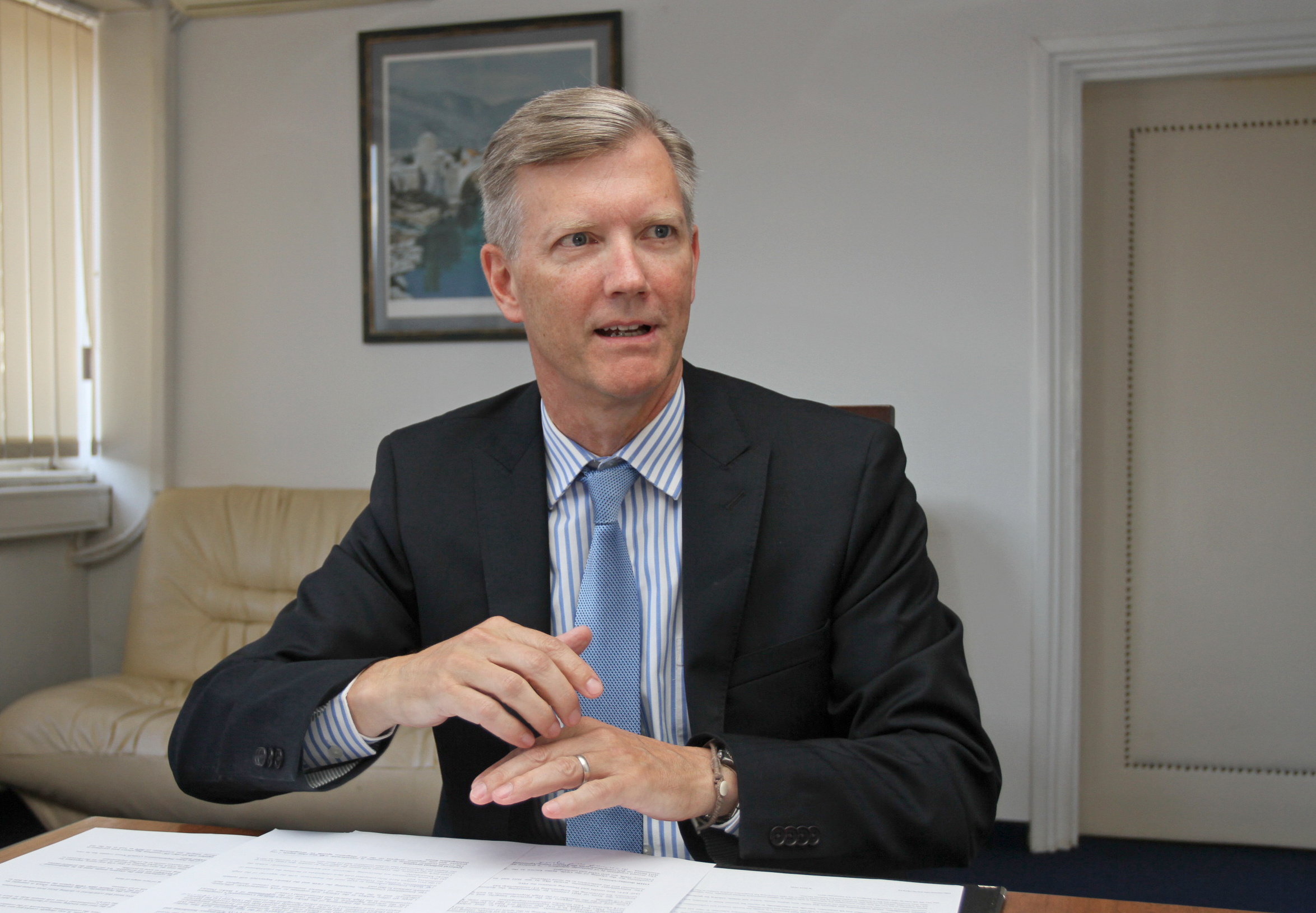 In September 2017, Ambassador Bruce G. Berton was appointed as the Head of the Organization for Security and Co-operation in Europe (OSCE) Mission to Bosnia and Herzegovina, which works on building sustainable democratic institutions, strengthening good governance and human rights principles, and supporting development of inclusive society. Moreover, the Mission supports the development of an effective and responsive security sector in Bosnia and Herzegovina.

At the beginning of the interview for Sarajevo Times news portal, Ambassador Berton pointed out that the biggest problem that BiH faces is the deadlock “because the political leadership does not want to compromise, they are not so interested in moving the country forward.”

Amongst the biggest political parties and three constituent peoples, there are different visions of what they want and it is hard to reconcile, Ambassador adds.

He adds that although the general elections in October were disappointing to many people, there is a sort of glimmer of hope. Part of the credit for that glimmer of hope would go to the Sarajevo Canton. It is a government of civic parties and they really try to pay attention to the issues that are important to citizens of the Canton, such as education, healthcare, safety and similar.

He further recalled the rhetoric that distracted voters but played well for the leaders. Those leaders are not much interested in changing the status quo, despite the talk of moving down the Euro-Atlantic path.

“What is needed here is a real conversation with BiH citizens about the issues that are important to them, so we work on things like good governance, education, human rights, rule of law, security sector governance and reform, fight against corruption…” Ambassador explained.

Sarajevo Times: On April 7th, BiH Presidency Chair gave an interview for Serbian local media, drawing a new territorial map, connecting Serbia, Republika Srpska, and parts of Montenegro. How would you comment on this? It is 2019, and the agreement on borders is not yet signed. Is it solely political rhetoric, diversion from economic problems or it has some greater connotations?

“There is no basis, legal or political for redrawing the boundaries of BiH, and saying things like that is unacceptable, both from a legal, but also from a political point of view, and it is irresponsible,” Ambassador answered.

“Those are all distractions from real issues that matter to people here,” Ambassador emphasized, adding that leadership does use those in order to imply that the only who are capable of protecting them from the others is the leadership of big parties.

Citizens deserve better, they deserve leaders who are willing to talk about the important issues, and when you are not willing to talk about it, the consequences are that you heighten the level of fear, you impede the process of reconciliation, and you see people losing faith in authorities and institutions, which is seen in the number of people who are leaving the country.

“We at the Mission want to promote dialogue and understanding and reconciliation and to talk about those real issues that are going to improve the life of the citizens here.” He added that it is not up to the international community to solve those issues, but the leadership of the country.

Sarajevo Times: There is harsh rhetoric from Croatia, such as that BiH is a potential hotbed for terrorists. Also, last year, there were alleged espionage activities conducted by Croatian’s SOA in BiH. As much as it is important for BiH to enter the European Union, it is also important to enter NATO. How to achieve this with these radical statements?

“Security challenges that the country faces here are not so different from the security challenges that the countries in the region face. It would be a mistake to underestimate the threat of extremism in this country but it is also a mistake to exaggerate it. In the last few years there were zero departures from BiH to Syria, Iraq or elsewhere,” Ambassador explained.

He added that the Mission has been working closely with the Ministry of Security on issues related to counter radicalization and radical extremism and the numbers are not even close to what was reported in some media regarding the number of people who were radicalized here.

“Radicalization is not beholden to religion or constituent people, radicalization exists on all sides,” Ambassador said.

It is not up to the OSCE Mission to BiH to assess the progress that has been made in relation to the EU or NATO accession processes. He added that there are some sensitivities to the NATO membership from Republika Srpska side.  The use of the Annual National Program as an obstacle to formation of country’s Council of Ministers is not necessarily the right approach.

Sarajevo Times: Corruption in BiH is definitely an eyesore, and this problem has been visible in BiH since after the war. How can specifically OSCE help in this issue?

“Corruption is pervasive in the country. It does damage to society, it discourages the investments, ruins the confidence of people in their institutions, and those are important issues that country needs to deal with,” Ambassador explained, adding that also citizens need to report when they see something wrong, and that some shift in consciousness should occur.

He recalled that in February last year, the OSCE Mission to BiH released the report on judicial response to completed corruption cases, which analyzed corruption cases and how judiciary responded to those, identifying problems and providing recommendations to overcome them. He added that in the new report, released last week, new nine recommendations were added to the original fifteen.

“There has been a bit of progress on some of the recommendations, but on six of them, no action whatsoever in the last year,” Ambassador said, adding that the progress should be made also in terms of cooperation between anti-corruption bodies and institutions.

As a good example, Ambassador commended Sarajevo Canton for establishing a database containing information on salaries of employees in public sector which is open to the public and transparent.

Legislatively, the OSCE Mission to BiH is working with parliaments at state and entity levels on conflict of interest issues, Ambassador Berton added.

Sarajevo Times: For the last 10 years, freedom of media in BiH is in constant decline, and the latest global index of media freedom states that BiH is on the 62ndplace. We are witnessing journalists being beaten on the streets, threatened etc. What is exactly that OSCE did in these situations?

“You have to have free media able to operate without fear or intimidation. This does not exist in the country right now,” Ambassador highlighted, adding that an attack against a journalist is an attack on freedom of speech and expression, and that we cannot have it here.

The legal framework in BiH guarantees media freedom but we could use stronger legislation, for instance in terms of ownership of media outlets. He added that there are many outlets in BiH where ownership is unknown, or which are associated with political parties, and that the law about this would help in reaching the better position of the media. In addition, there were talks on giving journalists a special status.

Ambassador emphasized that it is the safety of journalists that is the most important issue. “We do not see often enough leadership of the country condemning those attacks, institutions responding to those attacks in an aggressive way and bringing the perpetrators of those attacks to justice,” he explained.

He recalled that the OSCE Representative on Freedom of the Media, Harlem Désir, and himself condemned several threats made against journalists in Bosnia and Herzegovina. Speaking of those, Désir said: “these threats against journalists are unacceptable and must be condemned at the highest level. Authorities of Bosnia and Herzegovina must increase their efforts to guarantee safe working conditions for media professionals. For the democratic development of the country it is of paramount importance to make sure that safety of journalists is ensured at all times and that impunity not become common place.”

Also, the Mission engages in various trainings for younger people, such as media literacy training, how to think critically, how to distinguish the fake from the real.

The OSCE Mission to BiH has specific priorities, such as strengthening the rule of law, combating segregation and discrimination in education, improving respect of human rights, preventing corruption and strengthening the freedom of the media.

Ambassador Berton joined the United States Foreign Service in 1987 and has served in Sofia, Caracas, Moscow, Bermuda, Hong Kong, Rome, Mexico City, Frankfurt and Warsaw. He also served as a Watch Officer in the Department’s Operations Center and as the Director of the State Department’s Office of Management Innovation. He is the recipient of a number of State Department awards.

Before September 2017, for two years, Berton served as the Principal Deputy High Representative in Bosnia and Herzegovina and Brcko District Supervisor.

Galic and Gangloff discussed the Security Situation in BiH 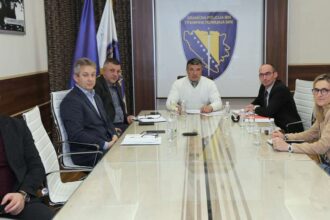 Galic and Gangloff discussed the Security Situation in BiH 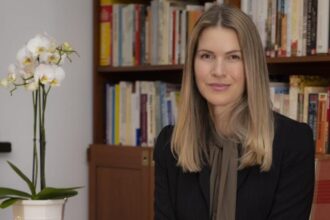 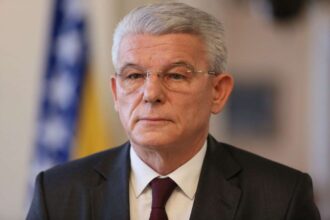