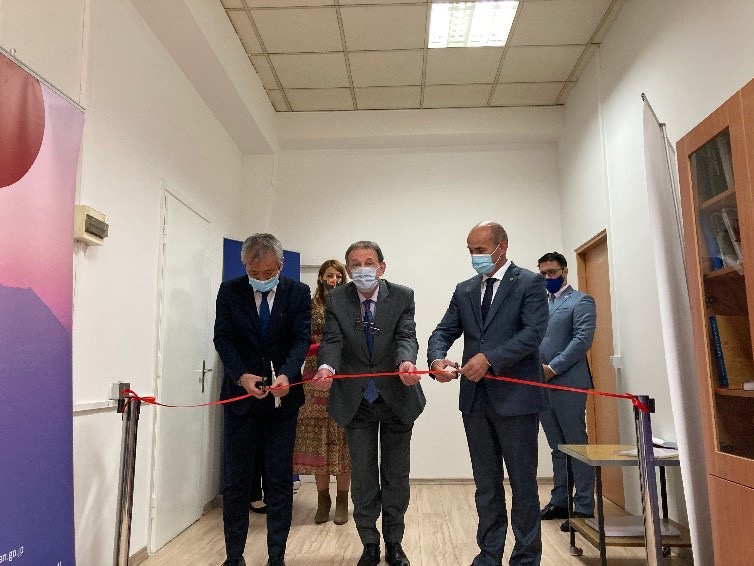 On 14 June 2021 a handover ceremony was held at the Faculty of Philosophy, University of Sarajevo (UNSA), upon completion of the Project for the Improvement of the Japanese Language and Culture Programme Classroom of the Faculty implemented with Japan’s grant aid in the amount of 32,547 Euro (63,658 KM) signed in February 2020. Through the Project, the Faculty has constructed a new classroom for Japanese language and culture program with brand new IT equipment including TV conference system.
Ambassador Makoto ITO congratulated the successful completion of the Project and expected the new classroom would satisfy the growing interest of youth in BiH in Japanese language and culture, referring the recent Japanese Foreign Minister’s visit to Sarajevo as Japan’s continued commitment to the promotion of cooperation with BiH in various fields including higher education.
Prof. Dr. Melika HUSIC-MEHMEDOVIC, Minister of Science, Higher Education and Youth, Canton Sarajevo, and Prof. Dr. Rifat SKRIJELJ, Rector of the University of Sarajevo, expressed their gratitude to the government and people of Japan for the generous support, which enabled the Faculty to offer better environment to the students, and wished to further develop academic cooperation with Japanese institutions. Ms. Ademina NJUHOVIC addressed the audience on behalf of the Ministry, promising strong support.
Attending the ceremony from Tokyo online via TV conference system donated by the Project, Prof. Dr. Taro KOMATSU from Sophia University hoped to strengthen joint activities with the Faculty of Philosophy of UNSA including annual summer Japanese language course in Sarajevo based on the memorandum of cooperation between Sophia University and the Faculty.
On the occasion, 169 English books on Japan donated by the Nippon Foundation were handed from Ambassador Ito to Prof. Dr. Muhamed DZELILOVIC, Dean of the Faculty.
For years the Faculty of Philosophy of UNSA has offered Japanese Language lessons to BiH citizens. In addition, the Faculty started Japanese Language Course for postgraduate students of UNSA in October 2019 and is expected to start Japanese Culture Course in the coming years. The Faculty also enjoys long-term cooperation with Sophia University in Tokyo which dispatches its postgraduate students to the Faculty as Japanese language teachers every summer.
Culture is one of the priorities of Japan’s official development assistance to BiH. Since 1996 the Government of Japan has extended cultural grant aid of nearly 2 million Euro for various cultural projects in BiH.