The government of Kosovo announced that at the meeting of Kosovo Prime Minister Albin Kurti with the EU envoy for dialogue Miroslav Lajčak and the US envoy for the Western Balkans Gabriel Escobar, it was unanimously agreed to remove the barricades in the north of Kosovo.

In a late statement from the Kosovo government, it was stated that a unanimous belief had been reached that the barricades in the north should be removed.

“They discussed the dialogue process between Kosovo and Serbia and the next steps, the latest developments in the country and current issues. At the meeting, a mutual agreement was reached to remove the barricades in the north, which hinder freedom of movement,” the statement said.

The statement also adds that Kurti said that Kosovo is a constructive party in the dialogue with Serbia.

“Through its readiness for meetings and talks, Kosovo has continuously shown itself to be a constructive party committed to achieving a legally and internationally binding agreement for the full normalization of mutual relations with Serbia with mutual recognition at the center,” said Kurti, Prime Minister of Kosovo.

At the same time, Escobar has been in Kosovo since Sunday, and in an interview with Radio Free Europe, he said that the barricades should be removed by those who set them up.

He added that he got the impression that the local Serbs feel isolated from the Kosovo government, but also that they are afraid of some people who are connected to Belgrade.

“I heard this from them. I also heard from members of civil society and other people who are not politically connected, that in many cases they feel isolated from the central government. Now in some cases they also feel intimidated by some people who are connected to Belgrade. That’s why we have to find a way out of this trap. And the way forward is through careful coordination, open dialogue and full engagement in dialogue facilitated by the EU,” said Escobar, Klix.ba reports. 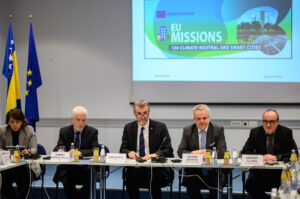