President of Serbia Tomislav Nikolic and President of RS Milorad Dodik said that the cooperation of Belgrade and Banjaluka, in relation to the Agreement of Special Parallel relations, will be better, and that the RS and Serbia will speed up the realisation of the joint projects.

After the session of the Council for Cooperation of Serbia and RS, Nikolić said that he hopes that the cooperation between Serbia and RS will be more honest and more stable in the period to come, because there are issues that will benefit both, which were not implemented in the best possible manner.

”Serbia does not have auto censure in cooperation with anyone, and especially not with RS” , said Nikolić on a joint press conference with Dodik, prime minister of Serbia Ivica Dačić and prime minister of RS Aleksandar Džombić.

Nikolić noted that Serbia is the guarantee of the Dayton Peace Agreement, which RS implements fully within BiH.

According to Nikolić, Serbia and RS in the framework of the Agreement of Special and Parallel Relations seek a better ground for the cooperation on third-world markets and joint production, as well as the coordinated action and cooperation of public companies.

Nikolić said that he is willing to cooperate with Sarajevo and with political representatives of Bosniaks, but for that a mutual will is needed.

Nikolić emphasized that BiH is the member of the UN, that Sarajevo is the capital; that BiH has two entities and three constituent nations, and he respects that.

Dodik said that the meeting of delegations of RS and Serbia was one of the better. He added that there were many projects that were realized in the past period, but also, the ground for further cooperation has improved.

He added that on the meeting a number of conclusions in the fields of energy, financial cooperation, as well as in other fields where there was already a dialogue have been adopted.

When it comes to financial cooperation, Dodik said that that in this area the Government of Serbia and the RS need to consider the effectiveness and operational capacity to implement previously agreed projects or redefine them, or direct them to areas in which we will  have “faster effects on cooperation undertakings.”

Delegations of Serbia and RS also talked about the issue of citizenship, and it was concluded that Serbia has good legal solutions for that issue.

”We’ve concluded that the administrative procedures need to be faster and deadlocks need to be removed in order that the citizens of RS can more easily apply for citizenship of Serbia, said Dodik.

On the agenda of the meeting they also talked about the issues related to veterans and the disabled; about the cooperation in the fields of culture and education but also about the inclusion of RS in the organization of event that marks the Edict of Milan in Niš which will be held next year. 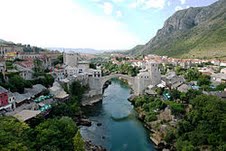 The meeting of the ”four” in Mostar today
Next Article