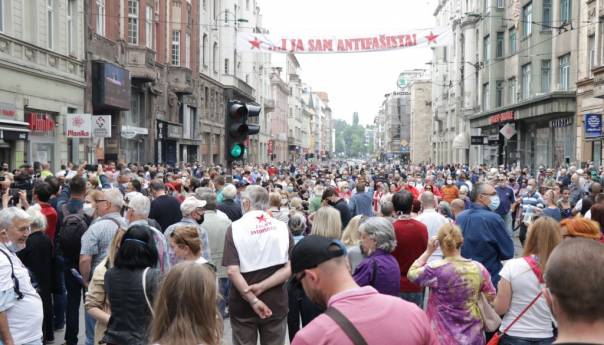 Members of the Alliance of Anti-Fascists and Fighters of the People’s Liberation War in Bosnia and Herzegovina (SABNOR), but also other anti-fascist citizens, several thousand of them, arrived in their parade and in silence in front of the Eternal Fire, where traffic was blocked.

The whole parade passed without a single incident, and there was some interesting situations.

Namely, the gathered citizens at one point, following the example of the legendary scene from the movie “Battle on the Neretva”, played a traditional Bosnian dance.

According to estimates from the Ministry of the Interior of the Sarajevo Canton (MUPCS), there were more than 5,000 participants in a protest walk in Sarajevo today, due to the holding of a mass for the victims of Bleiburg in the Cathedral of the Sacred Heart of Jesus.

In the short statement for Fena news agency, MUPCS spokesman Mirza Hadziabdic explained that there were no incidents.

The traffic was suspended from 12.40 to 13.35 in the area around the Cathedral, and after the end of the Mass, it was normalized again.