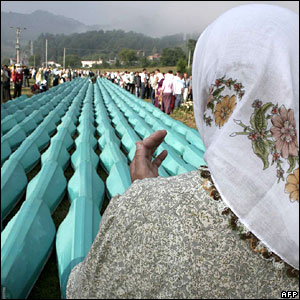 The remains of Sefik Osmanovic who was only 16 years old when he was killed back in 1995, today will be buried among the 71 victims of the genocide in Srebrenica. Next to Sefik’s coffin in the Memorial Center Potocari, which was taken from the former Battery Factory by members of his family and participants of “Peace March”, were his mother, sister, and niece.

“I have no strength to say anything,” said Jasmina, who came from Gracanica to bury her underage brother Sefik.

This will be the second time for mother Mina Osmanovic to bury a son in the graveyard in Potocari. She buried her first son Jasmin, who was murdered at the age of 20, at the first funeral for victims of Srebrenica 22 years ago.

“They managed to find only two Sefik’s bones, but we decided to bury them in order for our souls to find some peace. They will never find all of them, but I am grateful to find anything, so I can at least know where their bones are, to come and recite them surah Fatiha,” she said.

Mother Mina recalled that Sefik and Jasmin went with their father through the woods where they got lost. Later they heard that both of them were killed.

“Their father is still alive, he was in the concentration camp twice. We live in Gracanica now. May the God give us peace and to all the other families as well. There are thousands of victims. They did what they did, and we cannot change it,” said Osmanovic.

Sefik is one of the seven underage children who will be buried today in Potocari.