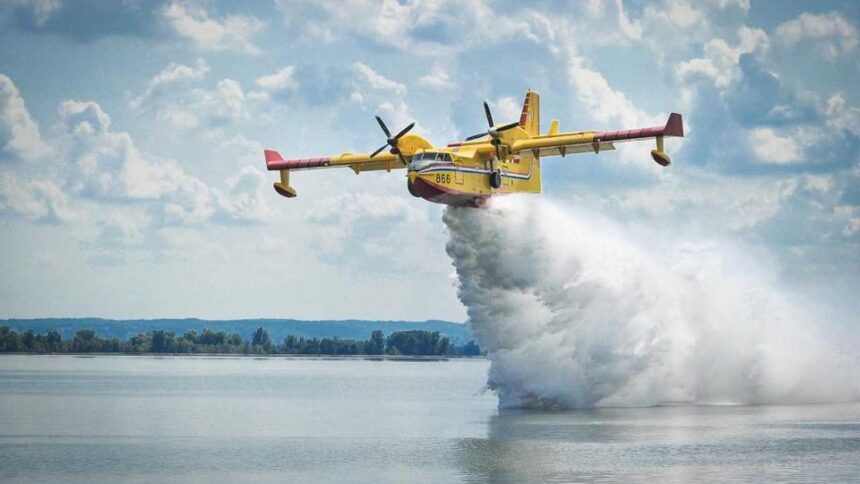 Bosnia and Herzegovina (BiH) has a total of seven helicopters that can fight fires, but no airplanes.

This was told to Radio Free Europe by the BiH Ministry of Defense and Civil Protection of the Republika Srpska – RS (one of the two BiH entities). The Federation of Bosnia and Herzegovina (FBiH), other BiH entity, does not own aircraft for this purpose.

The State Ministry of Defense has five helicopters that can be used when the civil protection of entities or cantons request it from them, while the Republic Administration of Civil Protection (RUCZ) RS has two such helicopters at its disposal – one from the RS Helicopter Service, the other from the entity’s Ministry of Internal Affairs.

The BiH Ministry of Defense explained that the acquisition of aircraft was previously discussed, while the RUCZ of the RS believes that BiH needs helicopters more than airplanes.

A Canadair from the Croatian Air Force has already flown in twice this summer to put out a fire on Mount Cvrsnica, in Posusje in the southeast of BiH, on July 19th and 22nd.

This fire-fighting plane arrived after a request for help was sent to Croatia by the BiH Council of Ministers.

Besides them, “air tractor” planes are also used, which are of smaller capacity, and can be filled on the ground, from tanks or hydrants.

In the south and southeast of BiH, where they have been fighting fires day and night since mid-July, they say that any plane would be useful.

“That would mean something to us, especially here in this area, where there is a fire from Konjic to Neum. Especially when we are working, like here, on Cvrsnica, where the terrain is inaccessible,” said Drago Martinovic, director of the Administration of civil protection of the Western Herzegovina Canton (one of 10 in FBiH).

Last year, the Armed Forces of BiH (AFBiH) received four new helicopters from the United States (U.S.), paid for mainly from U.S. funds, which can be used for firefighting.

However, after the accident last April, when one helicopter overturned during training, only three of the donation are currently available.

The Director of the Administration, Milan Novitovic, assesses that BiH territorially and in terms of the type of fire, as well as in terms of the size and proximity of the water catchment – is not the most convenient terrain for firefighting planes.