The so-called “Serbian world” without a shot fired, is already happening in Bosnia and Herzegovina (BiH). Whether it’s telecommunications, education, or economics. And all that is happening without an adequate response from the state of BiH.

From the next school year, elementary school students from Serbia and Republika Srpska (RS) will study the same material for six subjects, Serbian language and literature, history, geography, knowledge of nature and society, music, and art culture. The agreement on cooperation in the field of education was preceded by the Declaration on the Protection of the Serbian People, the Agreement on Preserving the Identity of the Serbian People, and, as the historian Husnija Kamberovic mentioned, it was all followed by Aleksandar Vulin’s latest statements on uniting the Serbian world.

“There would be nothing disputable if such common cores respected what the state of BiH is. Imagine when some other communities in Serbia did not ask for and receive curricula from neighboring countries. That would represent a kind of occupation of Serbia. Just as this is a kind of occupation of a part of BiH, ” Kamberovic pointed out.

Agreement on the establishment of special relations between Serbia and RS

On July 23rd, 2007, the Serbian Parliament adopted a law confirming the Agreement on the Establishment of Special and Parallel Relations between Serbia and the RS. This agreement, which derives from the Dayton Agreement, was signed to develop cooperation between Srpska and Serbia in the fields of economy and use of economic resources, planning, privatization and denationalization, science and technology, as well as education.

Special and parallel relations between Srpska and Serbia include the areas of culture and sports, health and social policy, tourism and environmental protection, information, protection of freedoms and rights of citizens, and the suppression of crime.

Continuing circumvention of the state of BiH is not part of the agreement, warns Husnija Kamebrovic: ”In fact, the Dayton Agreement provides parallel relations, but firmly guarantees the territorial wholeness and integrity of BiH. Serbia has also committed itself to respect that integrity. It violates integrity through parallel connections. And we can see that through a series of examples. ”

There are many examples. Telekom Srbija, majority-owned by the state of Serbia, through M: tel, has become inviolable on the territory of the RS entity, as a cable operator for television, internet, and telephony. The latest acquisitions by which the TV broadcasting rights of the English Premier League were paid ten times more than the real price, aimed at only one thing, spreading the influence of the regime in BiH, for which the key is attractive television content.

“There is no doubt that this is extremely dangerous, that the state leadership of Serbia is behind all of it and that the price for exercising influence is not being chosen, in this case in the region. Economic and then political interests are more easily attached to sports. Serbia is obviously conquering the market with uncompetitive moves,” stated Mehmed Halilovic, a journalist and former media ombudsman.

Projects without the consent of the state of BiH

Serbia has invested over 500 million euros in the RS entity through different projects last year. Investments are welcome, but numerous future capital projects are planned without the consent of the BiH state, such as the Drina River Hydropower Plant and the Trebinje Airport. The value of projects is close to a billion euros. In the first case, which should serve as a precedent for the second, the BiH Constitutional Court has ruled that there is a dispute between BiH and Serbia to be resolved by the BiH Concessions Commission in the next three months. If this does not happen, the case is returned to the Constitutional Court.

“Competence for concessions in that area is exclusively with the Commission for Concessions of the RS. Everything else is an attempt by political Sarajevo to jeopardize investments coming from Serbia, ” emphasized RS entity Prime Minister Radovan Viskovic.

RS is treated in Serbia as a state, or part of a future entitybelieves foreign policy analyst Dusan Janjic. Since last year, a joint holiday of Serbia and RS, the Day of Serbian Unity, Freedom, and the National Flag, has been celebrated. Milorad Dodik is present in Serbia at all important political, cultural, and sports events, always next to Aleksandar Vucic. His statements on peaceful separation have become daily, while Vucic reiterates that he respects the territorial integrity of BiH, but also the sovereignty of the entities: “But he does not respond to Dodik’s statements, nor did he react to Vulin’s statement on the Serbian world. Nobody asked Aleksandar Vucic if he respects the borders, but what he thinks about the Serbian world. But,obviously his subconscious is talking. He said that he protects the borders of Serbia, and why not the borders of BiH. He does not protect either of them, because if he did,  the matter of borders between the two countries would have been long ago resolved.”

All of the above is the creation of the Serbian world because there is nothing that favors BiH and creates its identity, he added.

And all that is happening without an adequate response from the state of BiH. 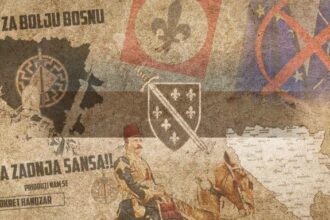