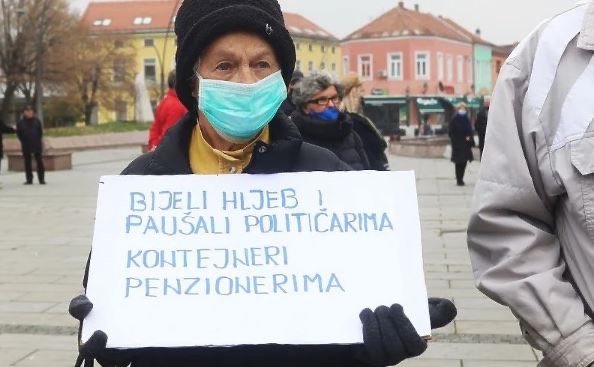 Although they have spent their entire working life working for almost 40 years, and many of them found themselves on the front lines of defense in the past war, today pensioners in Bosnia and Herzegovina are barely making ends meet.

“I don’t buy meat. I’m not a fan of it. In the morning, bread, dairy products and tea. I cook cabbage for lunch. I don’t cook with meat. That is, I cook a piece, sometimes with chicken. It is difficult for pensioners with one pension especially when a person is ill,” pensioner Sevleta Ahmedinovic says for BHRT.

According to Sevleta, retirees are less and less able to exercise their rights in health care. Her husband became seriously ill and as such found himself on a long waiting list.

“I take my husband to do the checkups privately, and one is 50 BAM. I had been waiting for a year and a half and that they had never called me from the state hospital. And the disease does not ask. The disease is progressing and progressing,” says Sevleta Ahmedinovic.

In a conversation with pensioners in Tuzla, they say that life has become the art of survival, Avaz writes.

The most endangered category

They follow the media every day, but through the media, the information is getting worse. They say they are too tired of analysts and their estimates. Pensioner Muhamed Ahmic believes that everyone in BiH is a great economist, but only on paper.

”Let every doctor of science in BiH, economist or anyone, prove that one pensioner can live in normal conditions. It is impossible. Especially when he pays for medication. Because health care provides medicines to those who are a mark and a half, and those who are ten, fifteen or twenty marks, it must be paid, this Bosnian policy is not for nothing,” Muhamed Ahmic adds.

And when pensions increased recently after a few years, it increased in percentage terms. So pensioners with a minimum pension had an increase of 32 BAM. Those pensioners who already have pensions of 1,900 BAM now have more than 2,000 BAM. The people who gave everything for the construction of Bosnia and Herzegovina today are the most endangered category of the population in the same country.

At the end of last year, we were hit by a wave of rising prices for basic foodstuffs. First, flour, coffee, oil, and oil products became more expensive. Prices of products and services in Bosnia and Herzegovina (BiH), which are used for personal consumption, measured by the consumer price index in April alone, increased by 2.4 percent on average compared to the previous month. The consumer basket for a family of four amounted to almost 2.500 BAM, while the average salary was almost twice as low. How to survive?

We often say that the citizens of BiH are real magicians in survival. First, the pandemic and now the crisis caused by the war in Ukraine affected all aspects of life. The trade union consumer basket calculated by the Confederation of Independent Trade Unions of BiH for April 2022 amounts to 2.493.84 BAM and is 73.88 BAM more expensive than the trade union consumer basket last month. The average salary paid in the Federation of BiH (FBiH) for February 2022 was 1.046.00 BAM, which is also the latest data published by the Federal Bureau of Statistics. The coverage of the union consumer basket with the average salary is 41.94%.

When making the union consumer basket, the average salary paid in the FBiH was taken into account, as well as the minimum living costs of a family of four consisting of two adults and two children, one of who is in high school and the other in primary school.

In just three years, we have found ourselves in two global crises. They had a negative effect on global chains of production, supply, and trade, which is reflected in the lives of ordinary citizens through the rise in prices of basic foodstuffs, medicines, construction materials, but also almost all other services. Unlike the beginning of the pandemic, when a huge number of workers lost their jobs, the situation has partially improved. But there is still a big gap between the employed and the unemployed. In March this year, the number of unemployed persons in BiH was 371.000. If we compare it with March last year, it is about 8.5% less. The largest number of unemployed persons is with high education and qualified worker (KV) qualifications – more than 118.000, followed by persons with secondary education and persons with no qualification with more than 100.000. The rest are semi-qualified and people with higher education. It is also worrying that almost 60% of the unemployed are women.

In recent months, consumers have been exposed not only to the rise in prices of almost all products but also to a number of other factors such as quality, non-compliance with margins, and, in the opinion of many, too few penalties. And the media has greatly contributed to the panic among citizens. Panic purchases of fuel and flour have led to shortages in stores. Given all the data presented, we recommend citizens continue to be magicians. Of course, politicians are also citizens of BiH, but they only need a magic wand for their personal interests, Federalna writes.