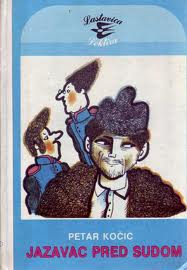 The Amateur Drama Studio ”Maske” did a premiere performance of the drama ”Jazavac pred sudom” based on the text by Petar Kočić. The drama was performed last night in Kostanjica.

The drama was directed  and staged by Siniša Tešanović  within the Project of the theater production of the Ministry of Education and Culture of RS. The director said that Kočić’s ideas are very prominent nowadays.

” The issues of the ordinary man and small nation are always the same. Kočić’s ”Jazavac” was adapted to our time and modernized  a bit, but we did not harm Kočić’s vision and ideas. The moral and the themes of the drama have stayed the same”- said Tešanović.

The director also announced that ”Maske” will perform at the theaters in  Banja Luka region and compete with their performance at theater festivals in RS and B&H.