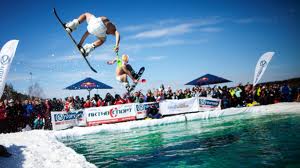 Nine years after the last Red Bull event in 2004, the spectacular Red Bull Jump&Freeze is coming back to Bjelašnica. It will be held on the 23rd February 2013. The Red Bull Jump&Freeze is a sports and entertainment trend, where the contesters build a ride and then after a short choreography jump into the freezing water. All who want to compete at 2013 Red Bull Jump& Freeze will have to design their costumes and their crazy snow rides, and of course prepare for an icy bath at the end of the trail.

All who want to apply for this competition should first consider the rules of the competition and after that send their application by the 28th January 2013 on this e- mail: prijave@redbull.ba

By 2014 FBiH will have 100 kilometres of highway
Next Article