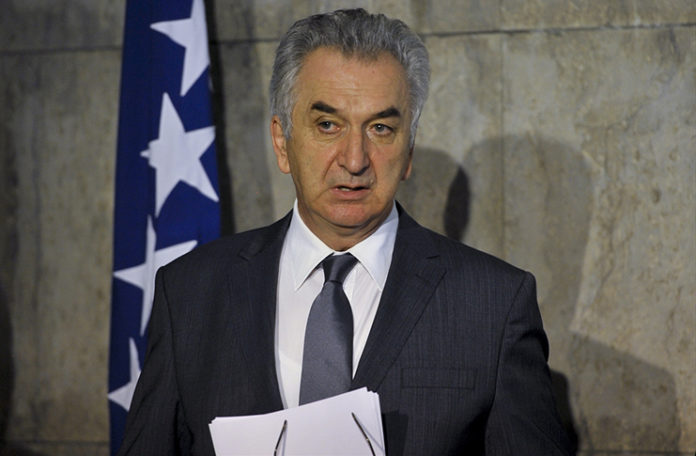 SDS President Mirko Sarovic said that parts of the agreement signed in Brussels are not acceptable because they demand taking over and monitoring the security and sanctions policy implemented by the EU, and that means towards Russia.

Sarovic pointed out that part of the agreement is acceptable, but three or four paragraphs, among which are listed, are not.

“Parts of the document related to the constitutional reform are also unacceptable, in accordance with the views of the Venice Commission, which seeks to reduce the share of withdrawing issues of vital national interest,” Sarovic said at a press conference in Banja Luka.

He said that it was unacceptable to take over the implementation of the decisions of all courts, which, as he claims, “means that the forests and land of the Republika Srpska will pass into the jurisdiction of Bosnia and Herzegovina.”

Sarovic mentioned that all political representatives saw the agreement before leaving for Brussels.

SDS Deputy President Milan Radovic said that the party’s deputies in the RS National Assembly do not need to attend special parliamentary sessions until the conclusions adopted earlier are implemented.

In the presence of the  President of the European Council, Charles Michel, and the High Representative of the European Union, Josep Borrell, the leaders of the political parties represented in the Parliamentary Assembly and the members of the Presidency of Bosnia and Herzegovina held a meeting on 12 June 2022 in Brussels and adopted the following political agreement.

They underline the importance of the implementation of reforms that advance Bosnia and Herzegovina’s European integration, namely the 14 Key Priorities set out in the Commission Opinion,

Participants reiterate the Joint statement of the members of the Presidency of Bosnia and Herzegovina on the occasion of the 25th anniversary of the Dayton Peace Agreement.

They recognise the importance of the political moment and responsibility towards all citizens of Bosnia and Herzegovina, bearing in mind the “United Nations General Assembly resolution ES‑11/1 on the aggression against Ukraine”, adopted on 2 March 2022[1].

To achieve these objectives, participants agree that it is essential to strengthen trust, dialogue, compromise building, and work towards peace and mutual respect  among all peoples and citizens in Bosnia and Herzegovina.

The political party leaders and the members of the Presidency arecommitted to the prosperity, democratic functioning, and security of Bosnia and Herzegovina, and pledge to constructively undertake necessary reforms to safeguard and advance these objectives.

Also, they underline the importance of  the extension of the EUFOR Althea executive mandate and its continued presence in Bosnia and Herzegovina to maintain a safe and secure environment.

In addition, they committed to full adherence to all final and binding international and domestic court decisions, and working constructively together towards their good faith implementation, with the objective of ensuring compliance with European standards and they shall take all necessary steps for the General Elections 2022 to be organised efficiently and conducted in an orderly manner, with necessary means. The parties shall conduct the election campaign fairly, constructively, and free from divisive and hateful rhetoric.

Shall cooperate constructively after the vote to ensure the swift formation of new legislative and executive authorities at all levels of government in line with the legally prescribed deadlines, and also shall work decisively towards fulfilling the 14 key priorities of the Commission’s Opinion on the country’s application for EU membership, in order to advance on the EU path and to respond to the aspirations of the people.

Additionally, they shall in this context, aim to urgently and no later than within 6 months from the formation of all authorities adopt: Law on Bosnia and Herzgovina High Judicial and Prosecutorial Council (HJPC) and Law on Courts; Law on Prevention of Conflict of Interest;  Public Procurement law; electoral reforms and those limited constitutional reforms needed to ensure full compliance with the judgements of the European Court of Human Rights and the Bosnia and Herzegovina Constitutional Court, Venice Commission recommendations and OSCE/ODIHR and GRECO recommendations; measures to fully restore regular policy dialogue with the EU, including through the SAA structures and take all necessary steps for the country to benefit from EU funds under the Instrument for Pre-Accession Assistance (IPA III), including by timely ratifying the Financial Framework and Partnership Agreement.

Furthermore, with the aim for Bosnia and Herzegovina to deliver on a critical mass of reforms and advance decisively on its EU path, agree to take steps: to ensure fully functioning institutions at Bosnia and Herzegovina level and ensure that decisions in line with Bosnia and Herzegovina level competences are taken at that level, and to undertake constructive dialogue following the elections on fundamental issues concerning the functioning of the country, including adoption of country-wide strategies in areas of shared competences, in line with the key priority requiring to ensure legal certainty on the distribution of competences across levels of government; to strengthen the prevention and fight against corruption and organised crime, including by ensuring that law enforcement and judiciary can operate independently and have all the necessary means to  establish a track record of proactive investigations, confirmed indictments, prosecutions and final convictions, including at high-level, towards improving the overall functioning of the public administration by ensuring professional and depoliticised civil service.

Are committed to take concrete steps to promote an environment conducive to reconciliation in order to overcome the legacies of the war, in line with key priorities and with the Joint statement of the members of the Presidency of Bosnia and Herzegovina, on the occasion of the 25th anniversary of the Dayton Peace Agreement.

Welcome the EU’s active support and dialogue-facilitation, confidence- and trust-building towards completion of the actions above.