The Party of Democratic Action (SDA) considers it inappropriate and worrisome that a special envoy of the State Department, Gabriel Escobar, separately commented on the views of the Islamic Community in Bosnia and Herzegovina regarding the changes to the FBiH Constitution and the Election Law, as well as the way in which he decided to do it.

“Just like any other religious community, the Islamic Community in Bosnia and Herzegovina (IC) has the right to take positions on issues that are of general social interest. It is worrisome that the views of the Islamic Community in Bosnia and Herzegovina are obviously being given special attention, which is confirmed by the comments of Gabriel Escobar, who asserted that the criticism of the IC on account of the imposed changes the FBiH Constitution and the Election Law was a “wrong assessment on their part,” stated the SDA.

The SDA reminds that numerous political and other organizations, both in Bosnia and Herzegovina and abroad have presented critical assessments regarding the aforementioned topic, “but they were not given any special attention, nor there were any negative comments by a special envoy of the State Department”.

“In the end, the Government of Croatia also expressed the opinion that Schmidt’s decisions were one-sided and made in favor of only the Croat political factor and the HDZ, but Escobar did not react to them, because apparently different standards are applied.

It is worrying that Escobar’s assessment comes at a time when we are witnessing a strong engagement of a part of the international community to introduce divisions within the Bosniak and overall pro-Bosnian political being, and that same part of the international community does not deal with those who block the institutions and slow down the Euro-Atlantic path of BiH, but they even reward them as it was the case with the HDZ BiH,” noted the SDA.

“It is exceptionally disturbing and dangerous, if the motives for such behavior are actually an expression of Islamophobia, and are wrapped in an unconvincing story about the fight against corruption, as if corruption exists only in Bosniak-led parties, and not in all others in BiH,” warns the SDA.

The SDA reminds that the House of Representatives of the US Congress has confirmed the worrying increase in Islamophobia, by passing a law that should establish the function of a special envoy of the USA for monitoring and preventing Islamophobia.

“Taking into account the ongoing events in Bosnia and Herzegovina, one gets the impression that the subject of the work of this special US envoy for monitoring and preventing Islamophobia should be the motives and engagement of individual diplomats in Bosnia and Herzegovina, for whom the Islamic Community and the Bosniak political factor, despite their proven Euro-Atlantic orientation, are clearly a thorn in their side,” reads the statement of the SDA. 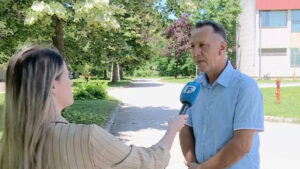