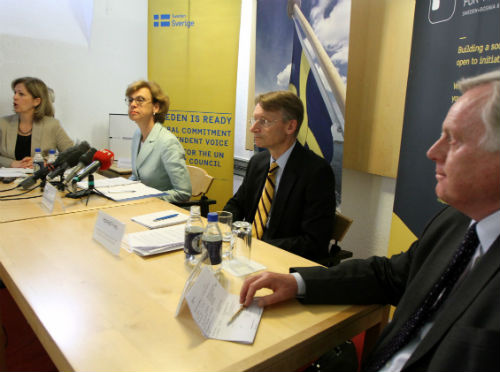 With the new seven-year strategy of development between Sweden and B&H, 15 million BAM will be ensured for the economic development of B&H, strengthening the rule of law and improving environmental protection.

That was emphasized yesterday in Sarajevo by the General Director for the international development cooperation at the Swedish Ministry of Foreign Affairs, Cecilie Björner, who is visiting B&H and talking with BH leaders about the exact ways of implementing these funds until 2020.

As she added, the first area of improvement will be to increase the economic integration with the EU and the strengthening of administrative capacities of BiH institutions and the competitiveness of small and medium enterprises, while the second area will be focused on institutional strengthening of democracy, including the increased respect for human rights and the reinforcement of judicial institutions.

The ecologically conscious and sustainable development of the society is the third segment of this planned support.

The strategy is called “A formula for Tomorrow“, and it is proof, as Bjorner said, that Sweden will, so far, stay dedicated to helping the countries of the Western Balkans on their path towards the European Union, which is a desire of most of citizens.

She reminded everyone that Sweden and B&H have had a successful, twenty years long cooperation. This stands as a good step forward for the Agreement on the stabilization and accessing of B&H to the European Union.

She invited all politicians to adopt a reform agenda and to implement it as it was agreed upon as it will be the platform for the submission of a credible application for EU membership.

Her attitude is that this strategy does not have only financial support, but also shows the strengthening of relations between the countries especially as 80.000 citizens from B&H live in Sweden and contribute to the development of the Swedish economy.

In the last 20 years, Sweden has invested 930 million BAM in B&H through various development programs from the construction of the country after the war to the development of the rule of law and the building of institutions.

Finals of the Competition: Support an Innovative Idea and Vote for Emir Memisevic
Next Article