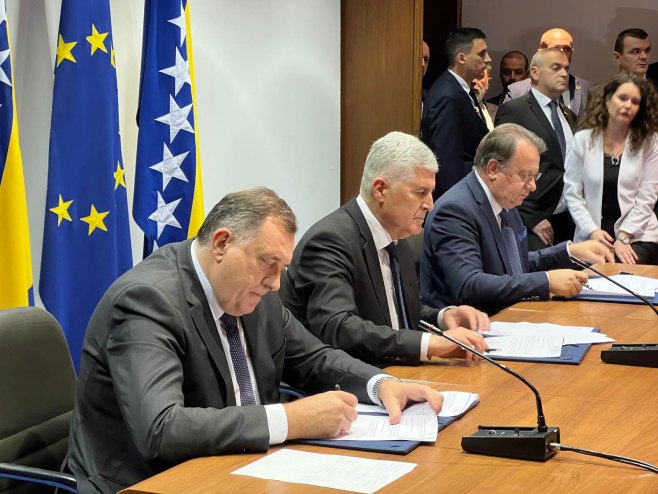 In the agreement of the ruling parties at the state level, which was signed two days ago, it is noticeable that NATO is not mentioned, but several topics related to border procedures for businessmen, amendments to the Electoral Law, the judiciary, and changes in the security-intelligence system can be noted.

The parties of the Eight (SDP, Narod i Pravda – NiP, Nasa Stranka – NS, SBiH, NES, PDA, Bosnia and Herzegovina (BiH) Initiative – Fuad Kasumovic, and For the new generations), SNSD and HDZ agreed on ”full membership in the European Union (EU)”. However, the issue of NATO membership was never mentioned in the agreement.

This is one of the issues for which SDP president Nermin Niksic and SNSD president Milorad Dodik pointed out that there is no agreement. Dodik’s statement two days ago gives an idea of what BiH’s relationship with NATO might be.

”We have differences regarding NATO and that is clear. Nobody has abandoned their original positions regarding this. We felt that we should not waste time on this. We said that we will engage in multilateral cooperation with security organizations and regional entities. The issue of security is clearly becoming an important story. BiH has a reform plan for defense and cooperation with NATO. It will continue to function like this,”said Dodik after signing the agreement.

Facilitation of border procedures for businessmen

The parties of the new government have committed themselves to ”protecting domestic producers and exporters through the efficient work of competent institutions, including the facilitation of border procedures and infrastructural capacitation”. Here, the agreement regarding the facilitation of border procedures, which has not been explained as to how it will be achieved, is particularly emphasized.

The Open Balkan, which consists of Serbia, North Macedonia, and Albania, was not mentioned in the aforementioned agreement, but its essence is the facilitation of border procedures for businessmen. In BiH, there is no unified position on whether the country should be part of the Open Balkan.

For some, it is a means for Serbia’s dominance in the Western Balkans, or, as some claim, a means for achieving a ”Greater Serbia”. On the other hand, for some, it is an opportunity for the economic development of BiH. SNSD supports BiH to be in the Open Balkan, while the Eight and HDZ have not yet commented on this issue. The EU and the United States (U.S.) support the Open Balkan.

The facilitation of border procedures, which are included in the coalition agreement, is also prescribed by the documents that were agreed upon within the framework of the Berlin Process at the initiative of the international community, and between six countries in the Western Balkans. These agreements, among other things, refer to crossing borders with an ID card only, but even before signing the agreement, Dodik announced that he would not approve it due to the involvement of Kosovo.

Amendments to the Election Law and, as stated, the democratization of the electoral process implies the following:

From this, it can be inferred that the HDZ maintained the position that the changes to the Election Law, which High Representative Christian Schmidt imposed on the night of the General Elections, did not implement the verdict of the Constitutional Court of BiH on the appeal of Boze Ljubic.

The Ljubic verdict refers to the election of delegates to the House of Peoples of the Parliament of the Federation of BiH (FBiH), i.e. it obligates the Election Law, which deals with delegation, to be harmonized with the Constitution of BiH. It was requested that the number of delegates from constituent peoples and Others is proportional to the number of citizens from the 2013 census.

With Schmidt’s decision, the number of delegates in the House of Peoples of the FBiH Parliament increased from 17 to 23 in the Caucuses of the constituent peoples and the Caucus of Others (11). The High Representative believes that the Ljubic verdict was thereby implemented. However, it should be said that the HDZ and other parties with a Croatian sign do not think so. Shortly after Schmidt’s decision, these parties announced that the implementation of the Ljubic verdict would be one of the conditions for the formation of the state government, which is coming true.

The election of the members of the Presidency is a big stumbling block. Judging by the attitudes so far, there is no agreement on this issue even among the three largest parties of the Eight, let alone among all the parties of the ruling coalition at the state level.

SDP and NS are of the opinion that the judgments of the ECHR must be fully implemented, which means the implementation of the civil principle, while NiP is of the opinion that a balance is possible between what the advocates of the civil principle and what the advocates of the ethnic principle, including the HDZ, demand – that the constituent peoples elect their representatives. First of all, this means that only Croats elect members of the Presidency from among the Croatian people. SNSD is of the opinion that the election of members of the Presidency does not concern the RS and that nothing will change in this entity on this matter.

It has not been explained what it will mean and how the ”full integrity of the electoral process” will be achieved. Will this entail the introduction of ballot scanners, putting polling stations under video surveillance, and a number of other technical improvements that SDP, NS, and NiP insisted on the most? Last week, after the session of the party’s main committee, Sabina Cudic from the NS emphasized that the condition of the NS for the formation of the state government will be ”improvement of the electoral process”.

The parties SDP, NS, and NiP, as well as SDA, pointed out SNSD and HDZ as the biggest culprits for the fact that the election process is not transparent, i.e. that these two parties are preventing technical changes to the Election Law.

Does it mean that these two parties still agreed to changes that many believe will significantly affect the election results? Or will “full integrity of the election process” mean the realization of integrity as Dodik envisions it, and what could also mean the formation of an entity election commission? It should be said that he announced this last month.

Does this mean that these two parties have agreed to changes that many believe will significantly affect the election results? Or will ”full integrity of the election process” mean the realization of integrity as Dodik envisions it, and what could also mean the formation of an entity election commission? It should be mentioned that he announced this last month.

The new state government promised to carry out ”a complete reform of the judiciary, guided by the constitutional competences of BiH, entities, and cantons, recommendations of the European Commission, European standards, previous experiences, and good European practices, firmly committed to an effective fight against organized crime and corruption.”

It has not been explained what the ”complete reform of the judiciary” will mean, nor how it will be achieved. Given that it has been emphasized that this will be done in accordance with the entity’s constitutional competencies and that the RS adopted a draft law on the formation of the Entity High Judicial and Prosecutorial Council (HJPC) at the beginning of this year, does this mean that the RS will form its own HJPC?

The president of SNSD repeatedly expressed his dissatisfaction with the work of the HJPC of BiH.

”The HJPC was occupied by Muslims who, through the Court and Prosecutor’s Office of BiH, want to model the political system, which is unacceptable,” Dodik stated last year.

It should be noted that the formation of the HJPC was a request of the EU for the start of negotiations for the conclusion of the EU Stabilization and Association Agreement.

It is worrying that Milorad Dodik, in one of his addresses the previous days, said that the prosecution and the judiciary at the state level, although he believes that they should exist, cannot exist as it is now. He emphasized several times that the Prosecutor’s Office and the Court of BiH are ”held” by the Americans and the British and that these institutions should be freed from international influence.

The Eight parties are also dissatisfied with the work of the state judiciary, which, as the opposition, condemned the views of the rulers of the RS on the HJPC. The President of HDZ, Dragan Covic, stated after the adoption of the RS draft law on the formation of the HJPC that ”everything that is in accordance with the constitution is not problematic”.

The agreement between the Eight, SNSD, and HDZ also deals with the reform of the security-intelligence system.

”The signatories of this agreement are determined to carry out the reform of the security-intelligence system with the aim of its complete depoliticization and professionalization, in order to completely prevent the abuse of that system for political or other purposes,” it was stated.

Everyone in the new government is dissatisfied with the work of the current director of the Intelligence-Security Agency (OSA) of BiH, Osman Mehmedagic, accusing him of acting exclusively in favor of the SDA.

Dodik, dissatisfied with the work of the OSA, also announced that the RS will get its own intelligence-security agency. This agreement does not state that this will happen, that is, it is not known how the intelligence-security system will be ”depoliticized and professionalized.”, Klix.ba reports. 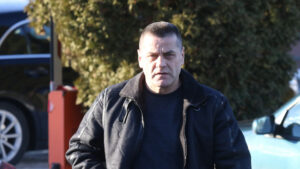