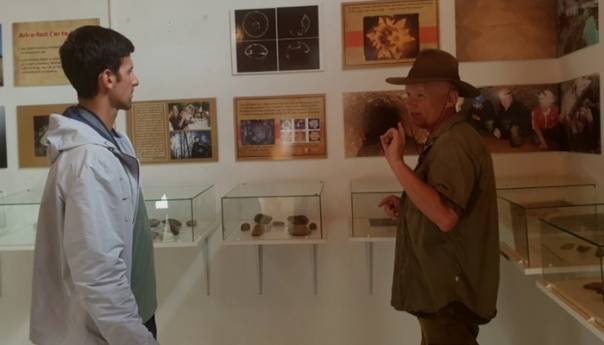 The best tennis player in the world, Novak Đoković, arrived in Sarajevo on Monday, and accompanied by the founder of the “Archaeological Park: Bosnian Pyramid of the Sun” Foundation, Semir Osmaganić, he visited the pyramids in Visoko.

As confirmed to Fena news agency from the Foundation, Djokovic’s arrival was prepared for two months and he so far visited the Bosnian Pyramid of the Sun, the Foundation Museum and the prehistoric underground tunnels of Ravna.

Djokovic is an extremely spiritual man who is interested in energy and spirituality, which is why he decided to visit the Bosnian Valley of the Pyramids, and it is planned that he will stay in BiH until Wednesday, accompanied by his parents.

“Bosnian valley of pyramids is the largest world complex of pyramidal structures and an archaeological phenomenon that should be researched intensely.”

This was one of the conclusions from international scientific conference in which 55 leading experts from 13 countries of the world participated. Today, this research is the largest global archaeological project that attracts dozens of thousands of tourists to Visoko every year.

In addition to the Bosnian Pyramid of Sun and a complex of tunnels under the valley of pyramids whose electromagnetic, ultrasound and ionized energies have healing features, the Archaeological and Tourist Park Ravne 2 was opened in this are recently. This park covers around 40.000 square meters and offers a whole series of new contents to the visitors.

“Archaeological and Tourist Park Ravne 2 is something new in Europe. This unique park is a combination of archaeological, tourist, recreational and energetic contents. We turned neglected wetlands into a beautiful natural ambience. There are yoga platforms, areas for meditation and relaxation. People feel comfortable here. When you arrange an area that has been neglected for 100 years, the soil starts breathing again and paying you back multiply. It is an area where soul gets to rest,” said Semir Osmanagić.

When entering the complex of tunnels, visitors notice that the temperature is significantly lower than on the outside. Another interesting fact is that temperature in the tunnel is always the same – twelve degrees. It is scientifically proven that concentration of negative ions, which clear the atmosphere from bacteria and viruses, is significantly higher in the tunnel than usual, which explains the beneficial effect of the tunnel on human body.

“A healing chamber is located 220 meters from the entrance to the underground tunnel labyrinth Ravne. People who have problems such as asthma, high blood pressure, elevated sugar and similar issues can solve them precisely by staying in this healing chamber. When we enter the tunnel, our body has no enemies, and our cells can work in peace and renew our body without disturbances,” Osmanagić said.

After eleven years, this project became the most active archaeological locations in the world. Every year, hundreds of volunteers from all around the world come to Visoko, together with dozens of experts. In the past seven years, 2.350 volunteers from 62 countries from six continents actively worked in this area.

Tunnels Ravne are located only several kilometers from the entrance to Visoko and the entire complex is open for public 365 days a year.