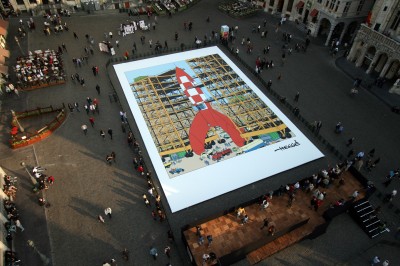 In late May, largest comic book panel in the world will be placed on the roof of the Markale marketplace in Sarajevo. Page from the comic strip “The Lost Tomb of Alexander the Great” will be printed on 30 x 24 meter panel.

Strip was done by the French author Gilles Kramer and a Bosnian artist Damir Nikšić.

The project is organized and financed by the French Institute in Sarajevo with the help and support of Comic book shop and publishing house “Agarthi Comics” from Sarajevo and the company ‘’Tržnice-pijace’’.

It was announced from Agarthi Comics that this will be the largest panel of comics in the world, and that the largest comic so far was exhibited in 2009 at Brussels and was ten square meters less than the table that will be set up in Sarajevo.

The look at the greatest comic books panel will be enabled from all floors and balconies of French Institute in Sarajevo.

In the summer, together with setting the panel, French Institute will organize several comic events in Sarajevo, such as the promotion and exhibition of comics.

Five Bosniak Victims from the War identified
Next Article