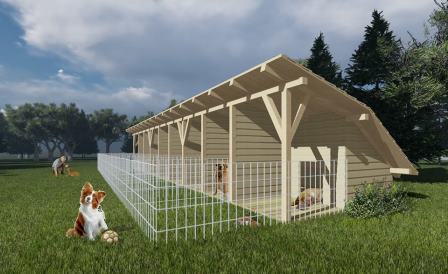 Sanski Most will get the most modern asylum for abandoned dogs soon.

Works on the construction of a facility where abandoned dogs will be placed is currently taking place. Previously, these dogs were placed in an asylum that was located a local landfill site.

This activity was started by the association “For Paws with Heart” two years ago when they purchased 18.5 hectares of land near the village Suhaca. The entire project was symbolically called “The Land of Happy Dogs”.

Around 60,000 BAM was invested in the current project and they still need around 160,000 BAM, which they are collecting by donations of good people. Their plan for the asylum is to open it in 2019.

They said that they came to this idea because the old shelter was in a bad condition and it did not provide humane living conditions for these animals. The shelter was constructed by the Municipality of Sanski Most at a surface of 180 square meters after the Law on Animal Protection was adopted.